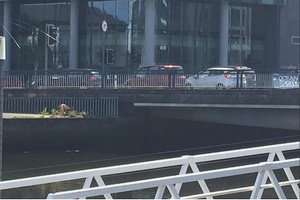 An entwined couple on the banks of the River Lee, Cork City in 2016

Recruitment is underway for a HSE-funded ‘public sex environment outreach worker’ role with the Sexual Health Centre in Cork city.

Dr Martin Davoren, the centre’s executive director, described it as a “challenging yet exciting new role”.

“It’s quite a bespoke role and it’s not going to be for everybody but we are excited to introduce it,” he said.

While some people use apps to hook up with sexual partners, Dr Davoren said there was a significant cohort of mainly older men who don’t use such technology to meet sexual partners.

“Public sex environments are active and alive in Ireland,” he said.