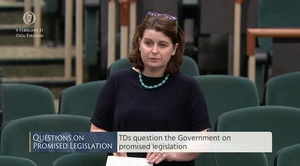 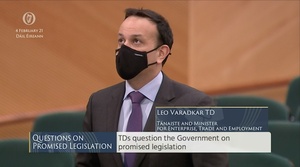 Social Democrat TD Jennifer Whitmore raised the destruction of testimonies given by survivors to the Mother and Baby Commission of Investigation. Witness testimony was quickly erased without detailed transcripts being made.

“Tánaiste, 550 survivors gave their testimony as part of the mother and baby homes commission. Those recordings were never fully transcribed ad they have since been destroyed. This is despite assurances from the minister in October that survivors would be able to access their own story.

“And also a clause in the 2004 Commission of Investigation Act that the commission is required to retain all evidence it receives.

“It’s been reported that the DPC [Data Protection Commission] has contacted the commission regarding the destruction of these files. However the commission is due to be dissolved on the 28th of February which is only a few weeks away. I think it’s really important that we don’t fail these survivors again, Tánaiste.

So I would ask will the Government immediately extend the term of the commission to enable for a full investigation of the destruction of these files and to enable the recovery of any information.”

“Thanks, deputy. I only heard about that the other day and was quite surprised to hear it, quite frankly. But it is something that I known the Minister for Children is now aware of and it’ll be for him, as to whether or not it makes sense to further extend the term of the commission.

“I think it is important to say again that the Mother and Baby Home Commission is independent of government. It was established by the Oireachtas. It’s not controlled by the Government, or the creature of Government. Commissions, by their very nature, just like tribunals, are independent bodies.

“And I think perhaps one of the flaws in the process is an independent body, like a commission, can spend five years hearing evidence, examining evidence and then makes its report but then is not there to explain it.

“And you’re there, as a Government minister, left trying to explain a report that you had no role in actually drawing it up. I don’t blame the commission for that in any way but I think if we’re going to do another inquiry on another similar issue, we [inaudible] with a better way to do it.”