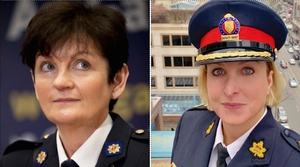 The Government has today approved the appointment of two Deputy Commissioners in An Garda Síochána following their nomination by the Policing Authority; Anne Marie McMahon of An Garda Síochána and Dr Shawna Coxon of the Toronto Police.

Dr Shawna Coxon has been Deputy Chief of the Toronto Police Service for the last three-and-a-half years.

Her appointment and that of the current acting deputy commissioner, Anne Marie McMahon, to the two vacant positions has been ratified by Cabinet.

The Government has in the past three years appointed police officers from other police services, including current Commissioner Drew Harris, to senior positions within An Garda Síochána.

Dr Coxon has been a police officer in Canada for the past 24 years and served in a variety of roles, including community and covert policing.

One of the new appointees will take responsibility for Human Resources and related matters, while the other will be in charge of Garda Operations including terrorism, organised crime, State security and intelligence…

This Was A Stick Up