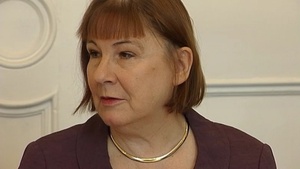 Tuam campaigner Breeda Murphy and adoptee and activist Eunan Duffy discuss the refusal by Justice Yvonne Murphy (top) to take questions from TDs and Senators about her controversial report into Mother and Baby Homes.

Judge Murphy had asked for an alternative date for her appearance before a joint Oireachtas Committee on Children, but has now indicated that she will not attend.

The commission of investigation is to be dissolved on February 28.

This is the eighth episode in a series of shows with Eunan and Breeda dealing with Mother and Baby Homes across the island of Ireland and the issues facing birth mothers and adoptees. All are available on our YouTube channel.

Mother-and-baby homes were shrouded in secrecy and some witnesses who gave evidence to the inquiry were traumatised individuals who had never spoken to anyone about being in the institutions.

The confidential committee hearings were set up to allow survivors to describe their personal experiences in a non-confrontational way.

Anonymity was assured and their accounts and allegations were to be listened to without challenge.

Privacy was a concern for many witnesses and, given several said their pregnancies were a result of rape for which no-one was convicted, their testimonies were legally sensitive.

The Data Protection Commission said: “We have written to the commission with a number of questions around the deletion, and the legal basis for the deletion, of these records.

“We are awaiting their response.”

When asked about the deleted recordings, the inquiry told BBC News NI it had explained the matter in its final report.

“Witnesses were asked for permission to record their evidence on the clear understanding that the recordings would be used only as an aide memoire for the researcher when compiling the report and would then be destroyed,” the report stated.

4 thoughts on “No Compelling Reason”