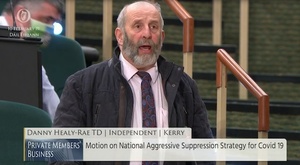 “Labour has to consider what the lockdowns are doing to people’s minds and to people’s heads….you don’t realise that because you are far removed from what is going on in rural Ireland….do you want to keep them in the wilderness, is that what this is all about?”

“We want to suppress and destroy the virus and basically ensure that we get it down so low to double digits that we can give Ireland the chance that 2021 will be different from 2020, because the people are at the end of their tether, and they need it.”

Labour's @DuncanSmithTD criticises the contributions of @MHealyRae & Danny Healy Rae after they accused Labour of not understanding workers or how to run a business @rtenews pic.twitter.com/HWR6hU7VyC

Not A Single Fawkes Was Given

29 thoughts on “A Voice In The Wilderness”