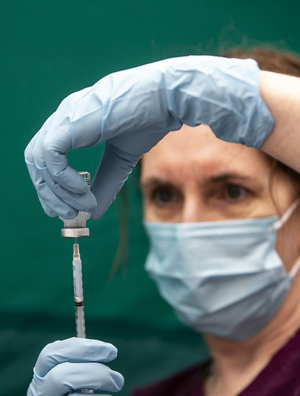 In the Dáil sitting in the Convention Centre.

“At the moment, I’m getting calls in my office that people are still saying that there are frontline workers and carers waiting for their vaccine but yet there are people that are not involved in the health system are getting the vaccine…I got five phone calls again, yesterday, about people outside frontline services getting vaccines, that were not in frontline.”

“I’m getting calls from doctors, from nurses, from home help in West Cork that haven’t been able to acquire the vaccine yet. And, at the same time, I’m getting calls that some politicians, councillors, are getting it in places. Is this turning into a nod and wink situation?

“Where the vaccine will be given to some and not to more? These people, at the very least, they deserve to be offered the vaccine, the doctors and nurses and home help first, and home carers.”

Tanaiste Leo Varadkar told the deputies that the Government policy is very clear and there are only three groups of people who should be getting the vaccine at present – care home residents over the age of 65; care home staff; and healthcare workers including some admin and reception staff; people over the age of 85.

“If you have particular incidences, or particular examples of people who received the vaccine who shouldn’t, do let us know and we’ll follow that up.”