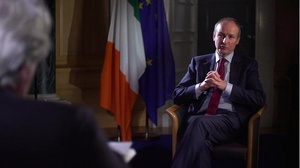 “I worry a bit about the post-Brexit noise from EU member states towards Britain and vice versa.

“I would tell one or two of them that they need to cool it, dial it down.

“This isn’t an ongoing battle between the UK and some of the bigger beasts of Europe. Let’s move away from that. They need to cool it. We’ll be collateral damage in all of that.

“Everybody needs to cool it a bit.”

He also indicated that any extension to the grace period for the NI protocol would be for a matter of months – “It can’t be a year,” he said.

The taoiseach also spoke about tensions in loyalist areas over the NI protocol and Irish Sea border in recent weeks.

Mr Martin said: “I don’t think the threats were as real perhaps, as might have been suggested, but you can see how it can tip over very quickly. And therefore we have to be very, very vigilant that it doesn’t,” he said.

He also talked about fears that such tensions could lead to a return to sectarian violence in Northern Ireland.

“If we handle this the wrong way, and if things are handled wrongly, you could provoke that response” he said.

Asked about the possibility of a border poll to decide the political future of the island of Ireland, the taoiseach said:

“If we just see this as a simple numerical majoritarianism, we’re going backwards, not forward. And I don’t believe the future of the island of Ireland is about majoritarianism.”

He said it would be a mistake to have a border poll in the next five years.

Brexit: Micheál Martin calls on ‘big beasts’ of EU to ‘cool it’ (BBC)

Have You Ever Known Us To Have A Plan B?

11 thoughts on “Beasts Of Burden”