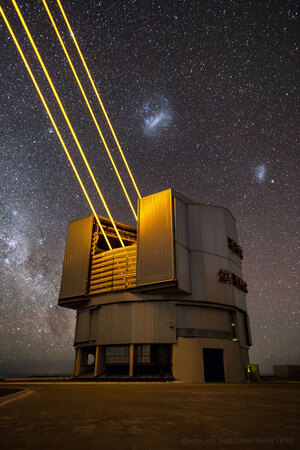 There’s a reason why stars appear to twinkle and it’s this: constantly moving pockets of slightly off-temperature air in the Earth’s atmosphere that distort the light paths from distant astronomical objects.

But how to counter the blur caused by this atmospheric turbulence? To wit:

The telescope featured in this image, located at ESO’s Paranal Observatory, is equipped with four lasers […] tuned to a colour that excites atoms floating high in Earth’s atmosphere — sodium left by passing meteors. These glowing sodium spots act as artificial stars whose twinkling is immediately recorded and passed to a flexible mirror that deforms hundreds of times per second, counteracting atmospheric turbulence and resulting in crisper images. The de-twinkling of stars is a developing field of technology and allows, in some cases, Hubble–class images to be taken from the ground. This technique has also led to spin-off applications in human vision science, where it is used to obtain very sharp images of the retina.

A Twister In Sligo