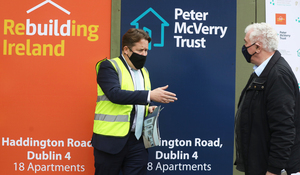 The government’s housing policy is starting to take shape. It is likely to increase supply significantly. However, because of conflicting objectives, it is also likely to miss out on key objectives.

The building of greater numbers of social housing units, after decades of neglect, will help dampen rising prices. A ramping up of cost rental, what the Green Party has promoted most strongly, should achieve something similar.

Where I feel the government’s strategy will achieve least is by placing too much of an emphasis on affordable housing.

In Ireland we have had a cultural attachment towards home ownership. This obsession has been why the development of property has become a touchstone of our economic being, often to the cost of having a more rounded, more diverse economy.

In recent decades Ireland has gone from having one of the highest levels of home ownership in the World, to now being under the European average. For some this is deemed to be a bad thing.

Mixed and balanced housing tenure should be the goal of any housing policy. We are still a journey away from that. What is making that a harder to journey is the clinging to of the belief that incentives benefit house buyers rather than property developers.

What taxation incentives have also done has been to direct building types of development other than residential housing.

Welfare for developers has given us more hotels, student accommodation and introduced us to the joys of co-living. All developed while a dearth of residential housing continued.

I’m not opposed to incentives, where such incentives have direct positive effect. What I would like to see incentivised would be to bring back unused, vacant and derelict properties back into housing stock. To seek these objectives would have a broader benefit of bringing City and town centres back to life.

Fair and affordable rents must be the policy goal, even above affordable mortgages. Government policy needs to promote this as the norm, not as some kind of runners up prize for the disappointed.

What it has done has made housing less attainable for more people. It has brought additional, but largely notional, wealth for an older generation many of whom live in housing that is much too large for their current needs.

Traditional housing policies have made housing people more difficult. They have created the instruments that are helping to ferment greater inequality.

Ultimately it is the economy itself that suffers. A population constrained by rents that are too high or mortgages that are too expensive, limits money being spent on anything else.

There are small signs of wanting to do things differently. But the movement is too slow, too tentative.

Demography demands that we do things differently. The real goal should be to own the issue rather than insisting that all of us should be preoccupied with owning property.

In baseball parlance that would be a home run.