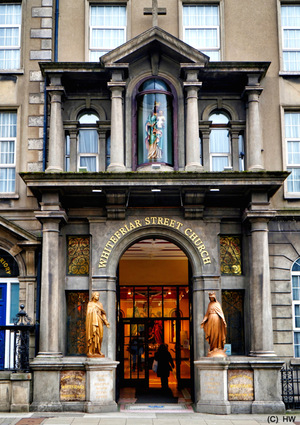 Ambling around Dublin during the pandemic lockdown there are not too many places opened to enjoy, but for the romantically inclined this weekend on the 14th of February, St Valentine’s Day, perhaps consider a visit to Whitefriar Street Church. It has an interesting history, as it is somewhat surprisingly the resting place of the man himself, St. Valentine.

Whitefriar Street Church in Dublin is located between Aungier Street and Wexford Street and is just a few minutes’ walk away from St. Patrick’s Cathedral and park. The church building has a rather dull exterior but the interior is quite beautiful.

It was built by George Papworth, a noted architect, and was consecrated by Dr. Murray on November 11, 1827. Built of stone and covered with Roman cement it measured 200 feet long, 34 feet wide and cost in those days a princely sum of £4,500. In 1950 a statue and shrine were built to honour St. Valentine and they were installed in the church.

Walk half way down the church on the right-hand side and you will find the statue and reliquary of the saint. The reliquary contains Valentine’s bodily remains and a plaque informs, “This shrine contains the sacred body of Saint Valentinus the Martyr, together with a small vessel tinged with his blood “.

Be mindful that on February 14, the Reliquary is removed from beneath the shrine and is placed before the high altar in the church and venerated at the Masses where there is a ceremony of the Blessing of Rings for couples hoping to be married.

Believer or unbeliever, you would have to be a hardened cynic not to be moved by the loving comments made by visitors in notebooks placed beside the saint’s altar.

Most commentators sign their surnames and note their country of origin, the visitors are from all over the globe. Heartfelt petitions are wrote invoking the saint to heal and bless their loved ones and for love, “For Paula and Ben to be in love forever”, “To love one another always like today”, “That she will accept my proposal on St. Valentine’s Day”.

But how did the remains of a Roman St Valentine come to rest in Whitefriar Street in Ireland?

Throughout the middle ages, the relics of Saint Valentine were kept in the Church and Catacombs of San Valentino in Rome, later they were relocated to the church of Santa Prassede during the pontificate of Nicholas IV.

During the nineteenth century a famous Whitefriar St Carmelite preacher was renowned for his oratory. Fr John Spratt was a native Dubliner who was born in Cork St. Dublin. He visited Rome in 1835 and because of his powers as a preacher he became known to Pope Gregory XVI who gifted his Church St Valentine’s relics.

The bodily remains of Valentine contained in a casket were brought to Whitefriar Street Church in 1836, and since then have been venerated especially around the Feast Day of St. Valentine on February 14th. The flower-crowned skull of Saint Valentine remained in Rome and it is on display in the Basilica of Santa Maria in Cosmedin, Rome.

There are many legends associated with St Valentine and how Valentine became associated with lovers and here are a few. Like many Christian saints we have to go back to the Roman era. In Roman culture polygamy was popular but the church’s teaching promoted monogamy, a marriage between one woman and one man.

St Valentine was a priest during the reign of the Roman Emperor Claudias II, who persecuted the church during that time. Claudias II, wanting to strengthen his army, passed an edict that forbade the marriage of his young soldiers based on the idea that unmarried soldiers fought more fiercely than married soldiers, surmising that married soldiers would fight less fiercely being afraid of what might happen to their wives or families if they died.

Against the Emperor’s wishes Valentine encouraged couples to marry and he secretly married them in direct contradiction of the edict. According to legend, in order “to remind these men of their vows and God’s love, Saint Valentine is said to have cut hearts from parchment”, giving them to these soldiers, a possible origin of the widespread use of hearts on St. Valentine’s Day.

For performing such marriages Valentine was imprisoned and tortured and put on trial. One of the men who was to judge him under Roman law was a man named Asterius, he had a daughter who was blind. Valentine was supposed to have prayed with and healed the young girl’s blindness. As a result of this, Asterius converted and became a Christian.

In the year 269 AD, Valentine was found guilty and condemned to a three-part execution of a beating, a stoning, and finally decapitation because of disobeying and denying the edict of Emperor Claudias II. The legend tells that the last words that the soon to be martyred Valentine wrote were in a note to Asterius’ daughter. He inspired today’s romantic missives by signing it, “from your Valentine“.

So, if you are lucky to have a significant other, keep the tenderness of a good heart, share your love and squeeze their hand a little tighter this Valentine’s Day.