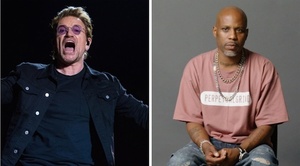 …the Bono song is called “Skyscrapers.” “Shit’s crazy. It got a Miami feel to it,” DMX teased.

Of Bono’s part he said:

“All muthafuckas need to do is listen to it, and we good.”

DMX Says Bono Is On His New Album (Stereogum)