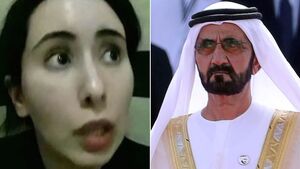 The UK’s Foreign Secretary Dominic Raab has said the case of Princess Latifa (top left) is “concerning” and the pictures of her are “very distressing”, adding that people want to see that “she is alive and well”.

Yesterday: “I Was Particularly Tricked When The Photographs Went Public”

The Thrifty Shopper Of Dubai

Candles In The Window

Captive Then And Now [Updated]

5 thoughts on “Proof Of Life”