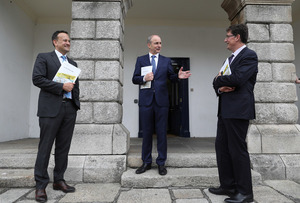 Imagine if you will, a government that nobody actually voted for. A government with no opposition that legislates at the behest of a committee of unelected civil servants.

A government that took over from a “caretaker” administration that had been voted out of office nearly five months previously yet still held full executive powers and introduced legislation resulting in civil restrictions unprecedented in the history of the State.

How did we get here?

Well, if it were not already apparent, the last twelve months have certainly served to expose the shocking state of ill-health of Irish democracy.

In addition to the scenario referenced in the first paragraph, there exists a web of inherently unhealthy relationships, both familial and commercial, spanning the entire Irish political class, a tamed, nodding media, and the pharmacological and technological industries.

This political and financial incest between those who introduce legislation, those who control and disseminate information, and those hawking their wares is evidently self-serving, but most certainly does not serve the public interest, and represents an existential threat to genuine, transparent democracy.

Sandwiched somewhere in the middle is a Police Force. Once upon a time it had designs on being a Police Service, but over the past twelve months it has most definitely reverted to being a Police Force; one whose members appear unable or unwilling to question the legality – or at the very least the morality – of their orders from their political masters, preferring instead to seek the comfort of overtime and the surreality of TikTok dance challenges.

A pliant citizenry have, of course, played their own role, and the ease with which the majority have demonstrated their willingness to unquestioningly surrender their most fundamental rights and freedoms has been truly shocking.

It would almost lead one to believe that the people no longer wish to bear the onerous burden of personal responsibility, instead wishing to cede responsibility for living their own lives to the State.

Everything has its price, of course. Perhaps public acquiescence is not so surprising after all, considering that for some time now indoctrination has been masquerading more and more as education. Stateism may very well turn out to be the life choice of a generation reared on an intellectual diet of The X-Factor, but it will be a shocking legacy to leave to their children, who didn’t sign up for it.

Evidently, the political situation in Ireland mirrors a broader trend towards “Super-Stateism” and the erosion of democracy and its associated freedoms in the western world generally and – more pertinently in Ireland’s case – the European Union. Bleating about European militarism from some of the usual suspects on the Irish Left ring hollow. They signed up for this, one and all. The days of Ireland opting out of aspects of the European Project that it finds unpalatable are long gone.

The cent began to drop in Brussels and Berlin the day the Irish people acceded to having a second EU referendum force-fed to them after returning the wrong answer in the first. The cent dropped all the way when the political class volunteered Ireland to be Europe’s fall guy for the economic crash of 2008 and the people went along with it. It’s all or nothing with the EU now, comrades.

Are these people really so naïve that they don’t realise that once political and monetary union have been achieved, then military union must necessarily follow?  Perhaps those who resolved to vote for them in the last election can answer the question for them in the next one.

Looking at the current lie of the Irish political landscape, it is honestly hard at the moment to see from where meaningful change will come.

Despite their virtue-signalling, hand-wringing (and hand sanitising), from a political point of view there is actually is very little to dislike about the current situation for those on the red and green wavelengths of the political spectrum. The long-term prognosis for the return of healthy democracy does not appear to be great.

However, the covid-19 narrative that has been created now seems to have almost taken on a life of its own. Trial balloons are being floated up on an almost daily basis in order to gauge the receptiveness of a fearful, weary public to absolutely ridiculous, dystopian nonsense.

The political class and their allies have created a monster, but they would do well to remember that artificial monsters, having once gained self-awareness, do have a habit of eventually seeking out their creators and… well, let’s say, coming home to roost.

The Irish body politic needs a prescription for a Great Reset, alright – just not the type of Great Reset that the self-serving elitists who are currently pulling the strings are working towards.

Peter Keating is a ‘part-time writer and artist’ based in Munster.

Windows To A ‘New Normal’

41 thoughts on “The Body Politic Is Unwell”