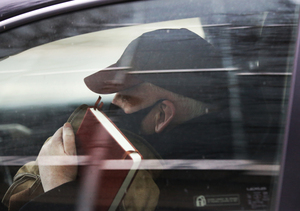 ‘Off The Ball’ on Newstalk.

Former Ireland rugby captain Brian O’Driscoll addressed the conviction of his former coaching mentor John McClean (top), who admitted to sexually abusing 23 boys in the 1970s and 1980s at Terenure College before taking up a role with UCD rugby academy.

He was unaware, he said, of any allegations against McClean until 2018, when victims came forward to tell their stories in Village magazine.

“If I had suspected anything, I would never have spoken in a positive manner, like that time at Blackrock College (on BT Sport in 2017), or any other time,” he said.

“I was completely shocked by this when it came to light a few years ago. Other people say that the dog in the street knew about it. I can honestly say that anyone in the rugby circles I was involved in never knew anything about it.

“I went for a walk in the park on Sunday and bumped into some ex-teammates from UCD and Leinster schools – we were all discussing it and everyone was equally shocked by the findings of it.

“There is no way that you wouldn’t speak as teenagers about those kinds of rumours, there is no way you would go on summer tours if you had any concerns whatsoever.

“ It was just an absolute shock. I had him as a quiet, reclusive sort of person but then I suppose you don’t always know the person behind the mask.”

…The IRFU, the Leinster branch and UCD rugby club all say they have not received any complaints of abuse against McClean. In a statement issued they said: “The crimes committed by John McClean are abhorrent and the devastation that his actions caused to so many people is unforgiveable.”

Johnny Watterson: I do not buy the apology around paedophile John McClean (Irish Times)