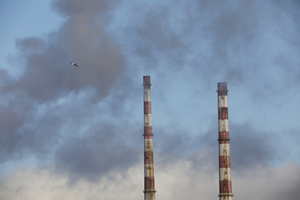 The pipes are calling.

“The ESB state that in order to prevent further deterioration of the chimneys, steel caps were erected in 2015 and that the ongoing cost of the maintenance programme, which includes the removal of hazardous material and the decarbonising of the inner thermal lining, will run to several million euro, and that this will secure the chimneys in the medium term,” the council said.

In 2017, ESB gave a written commitment for 10 years to maintain the chimneys. The red and white chimneys, standing at 207m tall, were built in the 1970s and only had a planned lifespan of 30-40 years. As such, the power plant ceased production over 10 years ago with both chimneys being decommissioned officially in 2006 and 2010.

Dublin City Council added that in order to maintain the chimneys, it: “may give rise to the need for the structures to be encased in a new concrete or fibreglass casing”.

Poolbeg chimneys ‘may need to be encased in fibreglass or concrete’ (Independent.ie)

Poles Apart But Together

The Pipes Are Calling

23 thoughts on “Save Poolbeg”