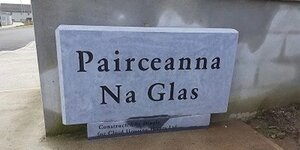 The newly opened 20 house development has been named ‘Pairceanna na Glas’ – a name that is meaningless and incorrect in terms of grammar and spelling, according to locals and scholars who are urgently pressing Kerry County Council to correct the error in what is a Gaeltacht town.

However the name stone has now been erected, and it lacks the requisite fada in “páirceanna”…

…Local GP Dr Peadar Ó Fionnáin, said no one is really sure what “glas“ means in the context because of the poor gramma

This Is Worse Than Peig