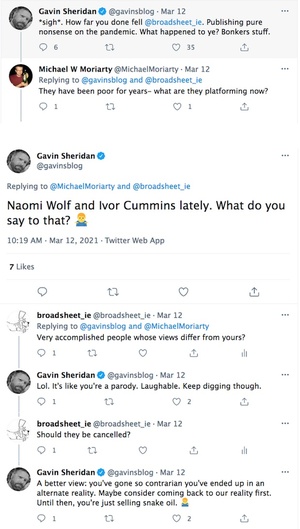 Gavin Sheridan, co-founder of accountability project Right To Know, challenges our decision to feature an interview with covid response critic Ivor Cummins and to repost a tweet criticising mask-wearing from author Naomi Wolf. 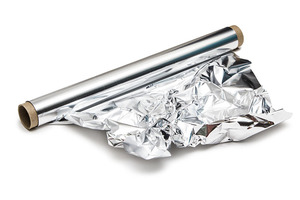 Via Tim Foyle in Off-Guardian (full article at link below), writes:

…So exactly what is it that conspiracy deniers refuse to acknowledge with such fervour, righteousness and condescension?

Why, against all the evidence, do they sneeringly and contemptuously defend the crumbling illusion that ‘the great and good’ are up there somewhere, have everything in hand, have only our best interests at heart, and are scrupulous, wise and sincere?

That the press serves the people and truth rather than the crooks? That injustice after injustice result from mistakes and oversights, and never from that dread word: conspiracy?

What reasonable person would continue to inhabit such a fantasy world?

The point of disagreement here is only on the matter of scale. Someone who is genuinely curious about the plans of powerful sociopaths won’t limit the scope of their curiosity to, for example, one corporation, or one nation. Why would they? Such a person assumes that the same patterns on display locally are likely to be found all the way up the power food chain. But the conspiracy denier insists this is preposterous.

It is painfully obvious that the pyramidical societal and legal structures that humanity has allowed to develop are exactly the kind of dominance hierarchies that undoubtedly favour the sociopath. A humane being operating with a normal and healthy cooperative mindset has little inclination to take part in the combat necessary to climb a corporate or political ladder.

So what do conspiracy deniers imagine the 70 million or more sociopaths in the world do all day, born into a ‘game’, in which all the wealth and power are at the top of the pyramid, while the most effective attributes for ‘winning’ are ruthlessness and amorality? Have they never played Monopoly?

Sociopaths do not choose their worldview consciously, and are simply unable to comprehend why normal people would put themselves at such an incredible disadvantage by limiting themselves with conscientiousness and empathy, which are as beyond the understanding of the sociopath as a world without them are to the humane being.

All the sociopath need do to win in the game is lie publicly whilst conspiring privately. What could be simpler? In 2021, to continue to imagine that the world we inhabit is not largely driven by this dynamic amounts to reckless naiveté bordering on insanity. Where does such an inadvertently destructive impulse originate?

The infant child places an innate trust in those it finds itself with – a trust which is, for the most part, essentially justified. The infant could not survive otherwise.

In a sane and healthy society, this deep instinct would evolve as the psyche developed. As self-awareness, the cognitive and reasoning abilities and scepticism evolved in the individual, this innate trust impulse would continue to be understood as a central need of the psyche. Shared belief systems would exist to consciously evolve and develop this childish impulse in order to place this faith somewhere consciously – in values and beliefs of lasting meaning and worth to the society, the individual, or, ideally, both.

Reverence and respect for tradition, natural forces, ancestors, for reason, truth, beauty, liberty, the innate value of life, or the initiating spirit of all things, might all be considered valid resting places in which to consciously place our trust and faith – as well as those derived from more formalised belief systems.

Regardless of the path taken to evolve and develop a personal faith, it is the bringing of one’s own consciousness and cognition to this innate impulse that is relevant here. I believe this is a profound responsibility – to develop and cultivate a mature faith – which many are, understandably, unaware of.

What occurs when there is a childish need within us which has never evolved beyond its original survival function of trusting those in our environment who are, simply, the most powerful; the most present and active? When we have never truly explored our own psyches, and deeply interrogated what we truly believe and why? When our motivation for trusting anything or anyone goes unchallenged? When philosophy is left to the philosophers?

I suggest the answer is simple, and that the evidence of this phenomenon and the havoc it is wreaking is all around us: the innate impulse to trust the mother never evolves, never encounters and engages with its counterbalance of reason (or mature faith), and remains forever on its ‘default’ infant setting.

While the immature psyche no longer depends on parents for its well-being, the powerful and motivating core tenet I have described remains intact: unchallenged, unconsidered and undeveloped.

And, in a world in which stability and security are distant memories, these survival instincts, rather than being well-honed, considered, relevant, discerning and up to date, remain, quite literally, those of a baby. Trust is placed in the biggest, loudest, most present and undeniable force around, because instinct decrees that survival depends on it.

And, in this great ‘world nursery’, the most omnipresent force is the network of institutions which consistently project an unearned image of power, calm, expertise, concern and stability.

In my view, this is how conspiracy deniers are able to cling to and aggressively defend the utterly illogical fantasy that somehow – above a certain undefined level of the societal hierarchy – corruption, deceit, malevolence and narcissism mysteriously evaporate. That, contrary to the maxim, the more power a person has, the more integrity they will inevitably exhibit.

These poor deluded souls essentially believe that where personal experience and prior knowledge cannot fill in the gaps in their worldview – in short, where there is a barred door – mummy and daddy are behind it, working out how best to ensure that their little precious will be comfortable, happy and safe forever.

On The Psychology Of The Conspiracy Denier (Tim Foyle, Off-Guardian)