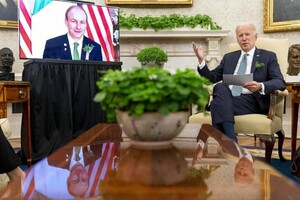 From top: US President Joe Biden on a call with Taoiseach Micheál Martin yesterday; Heber Rowan

Yesterday was St. Patrick’s day. The great and glorious international celebration of the grassroots, shamrocks and greenery of Irish diplomacy. A privileged position.

Around the world, despite an international pandemic, this day was marked. In green.

You’ve heard that before and will have to keep hearing it. Why? It’s tradition.

So what is a tradition, in light of so many aspects of it being paused or as many feared ended with the COVID-19 pandemic that resulted in last year’s celebrations similarly, cancelled? In fundamental terms, it is a thing you do, sometimes with others; repeatedly. There is a unique power to that.

Why does that matter? Well as the old Aristotelian saying goes “We are what we repeatedly do”. If you run often, you are ‘a runner’. If you watch football often you are a ‘football fan’ and indeed if you drink a lot of pints… very often, you can become ‘pint man’.

Tradition has its own power and significance. If you keep doing it, consistently, persistently: that matters. Good habits and bad. International celebrations of nationality and craic alike. It’s why religions put a lot of store in doing the same things every day or every week. It changes and develops you as a person and collectively, changes a culture.

People around the world will find any reason they want to drink any other day of the week if they feel like it. At least Ireland’s soft power is manifested in a toast to the Irish. The tradition is valued, and thus the Irish are valued.

The past couple of weeks, we saw a considerable discussion about permitting the Irish Taoiseach Micheál Martin to attend the traditional St. Patrick’s day celebration with the US President in Washington. Like many talks nowadays, the discussion probably began with their aids asking each other, ‘can you hear me? or ‘are you muted?’. Virtually.

The fear of  breaking the tradition, of meeting in-person to exchange a bowl of shamrock and all of the events that go on around Capitol Hill by having a virtual meeting, was that it would be once changed, forever changed.

No matter which leader has occupied either office for the past number of decades, the shamrock trade is up there with the 12.5% corporate tax rate. Prime directives of the state to uphold. Few get the chance to meet so often and so prominently. As indeed there are potential votes to be had from it for both. It’s a win-win.

However, with Joe Biden potentially being the last of the old-school Irish-American Democrats on the block to reach the White House, the fear is there that in time to come, the shamrock trade will end. Yes, all traditions eventually end in their own way, by neglect or by decision and that is something a future Irish government will have to deal with. At least in 2021, it continued.

We have no similar tradition with any other country that comes to mind that goes anywhere near the same scale of what the Washington shamrock trade means for the Irish state. But one day, St. Patrick’s day could become like all other international celebrations of national holidays. Something to note only if you have a personal stake.

Joe Biden told the BBC after he got elected “I’m Irish”, sending chills down the backs of those in Downing Street thinking that Brexit means all international agreements are now totally open season. That said, such a connection doesn’t seem like it will win Ireland any trade wars with the UK over Brexit and the vaccine trade any time soon.

According to The White House:

Getting something from the meeting

Ireland wants and very much needs the Good Friday peace agreement to remain in place. The gun is kept out of Irish politics and life in Northern Ireland because of it. That’s the big item agenda of any talks between Ireland and America undoubtedly.

The other big concern is if Ireland could be in a position strong enough to get its own extra supply of surplus vaccines from America, by asking for it. The temerity to ask and then get them would be a big manifestation of Ireland’s gentle touch with America. A powerplay.

This does need to be mentioned, could asking for such supplies hinder Ireland’s hopes of keeping the tradition of the shamrock trade alive when the Irish-American lobby may become reduced in years to come with demographic changes?

Or would American foreign direct investment in Ireland and other interests still warrant that unique relationship between both?

The longer-term efforts of keeping peace in Northern Ireland are an easy win that plays to the message that America is a force of good in the world. That its hegemony has peaceful dividends.

A short term effort of giving Ireland more vaccines is a harder political sell for the White House. China is, inevitably going to supplant America on many levels and  there have been no significant efforts to get the Russian vaccine used in Ireland. Ireland knows that because of the EU and US relationship being stronger than others, it can ask for things like vaccines from the US.

Yet, the short answer Ireland received yesterday was a polite no. The matter will be ‘monitored’ for now. Joe said no.

St. Patrick’s day this year between Ireland and America was still marked with a degree of celebration. The meeting went ahead and buildings internationally were lit in green.

Sadly what gives the tradition its very power for all of us around the world is the getting together. Dancing, parading in the streets, and having a good day out. Times Square was showing Irish dancing on the big video screens but sadly few were there to see it in person.

Hopefully, this will all just be a note of historical novelty as future generations of our international diaspora will keep alive the power of tradition. in person.