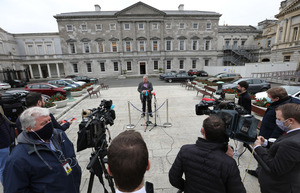 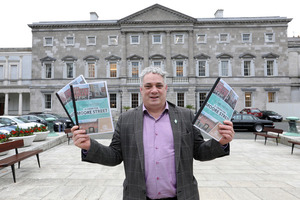 Sinn Féin spokesperson on Arts and Culture, Aengus O Snodaigh launches a document outlining his proposals for the revitalisation of the Moore Street district.

The plan — called A Vision for Moore Street — includes turning Moore Street into a cultural quarter and ‘living museum’ which would involve developing the area to look like it did during the 1916 Easter Rising.

Sinn Fein TD Aengus O’Snodaigh is set to bring forward a bill to the Dail on Wednesday that will put the Moore Street plan on a legislative footing.

The buildings at 14-17 Moore Street were a key base for the 1916 Rising leaders and mark the place where they met for the last time. The streets surrounding the headquarters were also key battlegrounds during the Rising.

UK property group Hammerson, which owns a six-acre site stretching from O’Connell Street to Moore Street and Parnell Street, are set to seek planning permission next month that would involve knocking down buildings and changing the streets.

Anyone Have Sean Crowe’s Number?

Behind The Men On The Wire