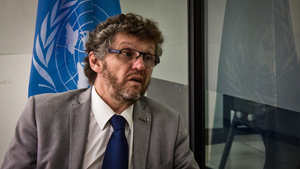 The Irish Council for Civil Liberties (ICCL) has contacted Fabian Salvioli (above), the UN Special Rapporteur on the promotion of truth, justice, reparation and guarantees of non-recurrence about the Mother and Baby Home report

The Irish Council for Civil Liberties (ICCL) has written to the UN expert on truth, justice, and reparations regarding the Mother and Baby Homes Commission report.

The ICCL warned Fabian Salvioli, UN Special Rapporteur on the promotion of truth, justice, reparation and guarantees of non-recurrence, of the ‘real possibility’ that the government’s plan to deal with historic and ongoing rights violations ‘will be insufficient to meet Ireland’s human rights commitments under international law’.

Via Irish Council for Civil Liberties:

In our letter to we outline where the government plan falls short when it comes to investigations with teeth, identity rights, and exhumations.

We also flag two main problems with the Institutional Burials Bill. The first is that it disapplies the Coroners Act. This means inquests to establish cause of death may not be carried out – in violation of survivors’ right to truth about what happened to their loved ones.

We recommend that inquests should be carried out into mass institutional burials as a matter of course.

The second issue is the list of restrictions for carrying out excavations – including the presence of dwellings on the site. For example, the burial site of 836 children at the Bessborough Mother and Baby Home has not been established, but the Bill would appear to exclude the possibility of excavating this site, as there are dwellings already there and planning permission in the pipeline for more.

The Mother and Baby Homes Commission recognised that “it is highly likely that the burials did take place in the grounds of Bessborough. The only way that this can be established is by an excavation of the entire property, including those areas that are now built on.”

The process for identifying or locating burial sites is unclear and not provided for by this Bill. ICCL flags this key gap in our letter to the UN and recommends that government provides a clear and transparent process to identify and locate potential burial sites.

ICCL recommends that government either amends this Bill so that it is line with the UN framework for Transitional Justice, or that it scraps the Bill and amends the Coroners Act to allow for excavations of mass burial sites associated with institutions.

‘Please Do Not Let This Be Your Legacy’

Dreams From My Father