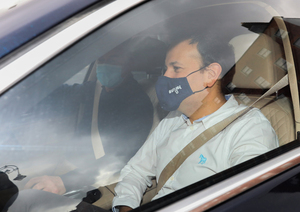 Further to the Irish Examiner‘s exclusive this morning…

…revealing documents released to Sinn Féin’s Pearse Doherty (above questioning the Tanaiste last November) show that Mr Varadkar sought to have a hard copy of the GP pay deal between the Government and the irish medical organisation (IMO) waiting for him as he emerged from the Government jet around the same time he was looking for IMO boss Maitiú Ó Tuathail’s home address.

“This shows the extreme lengths that he went to in order to leak a confidential document to his friend. Leo Varadkar told the Dáil that he sought this document for his personal use, but these revelations show that he was making arrangements to leak it before he even had it in his possession.”

Leo Varadkar is facing calls to resign over the criminal investigation into his leak of a private document https://t.co/sS73652ge0

“The Curve Has Been Flattened And Has Now Plateaued”

45 thoughts on “Lying Leakers Leak Over Us All”