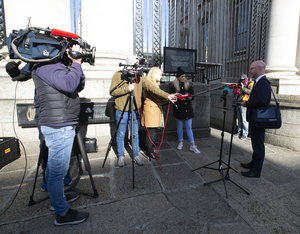 It’s something similar with government communications: you deliver you message and give the public the time to let it sink in.

What you certainly do not do is to talk across yourself and your message, chopping and changing the narrative while folks are still trying to take-in the last one.

There is nothing wrong with a minister having a new idea, indeed it is something to be encouraged. What is important is that it is an informed idea. What you don’t do is to contact a journalist to communicate an idea to the public until it has been fully formed and explored with colleagues and – hopefully – some real live experts.

You do not say something that could appear to have just come off the top of your head. Yet, from where I sit, that is just what appears to have happened last weekend when Stephen Donnelly told the Irish Times he was planning to ask officials to examine the option of rolling out the vaccine to 18-to-30-year-olds next, instead of to 40-and-50-year-olds.

Catching your colleagues and the experts unaware and on the hoof is not a good move. I can see why the Donnelly camp is eager for its minister to come across as ahead of the curve on the issue, considering that there is a perception that he had spent so much time behind it.

I’m sure it must be galling for a capable media performer like Stephen Donnelly to find himself having to stick strictly to a dry, jargon laden script written by others, such as NPHET and NIAC, and not have the capacity to riff or ad-lib off it.

It must be tough for someone who has enjoyed been a freethinker in the past to stand by and stand over very dry communications while ministerial colleagues, including his two immediate predecessors, happily communicate less like as government ministers and more like hurlers on the ditch hoping to reflect the public’s views back at them. It’s as if Simon Harris has reworked the awful 2005 Tory election slogan: Are you thinking what we’re thinking into I’m thinking whatever you’re thinking.

Government communications isn’t rocket science. It is about discipline. It is about honing the message down to its core essentials and then putting it across in normal everyday language that ensures that it is understood equally by all.

You decide your message. You simplify the language. You bin the jargon. You use short sentences. You give it to the public straight. You keep all ministers on the same speaking points.

When governments departments and political parties get polling companies to do focus groups, it is not to help them decide the policy, but to test if the planned communications will get the message you are trying to convey across to the public in a way that they can understand. You test the communications more often than you test the policy.

You don’t talk in terms of “quarters”. You leave that stuff to newly appointed supermarket assistant managers trying to sound like future managing directors.

Normal folks talk in terms of Easter, the summer, the June bank holiday. So, your communications should reflect this. Say the beginning of July, not the end of Quarter 2. Don’t talk about moving deliveries of vaccines from quarter 4 forward to quarter 2. Say that the vaccines we were expected to receive in the run up to Christmas will delivered before the end of June.

Speak the way people speak. Voters are inclined to assume that a minister, or even a Taoiseach, knows what they are talking about, so deploying unnecessary management-speak or civil servant-eses into your messaging risks giving the impression that you are trying to make things more complicated or – worse – that you are pretending to have greater knowledge than you do.

A friend spotted a curious example of this latter phenomenon courtesy of a Fine Gael advert in a provincial newspaper promoting a planned public zoom meeting. From what I can see it was one of a series of online meetings the party is planning featuring the Tánaiste and the local Fine Gael TD – and in most constituencies that’s now just one person – talking about remote working.

Because of my background in human resource management and employee relations I am aware of jargon and management-speak developing around what some call remote working, what others call telework, but what most folks call, working from home.

Clearly some bright spark in Fine Gael saw the perils of putting Varadkar’s face below a banner proclaiming: “The future of working from home for Mayo/Wexford/Louth etc.” as this assumes the workers concerned can afford a permanent home from which to work safely and in comfort and are not just barely managing to work remotely in a small flat, a shared apartment or off the dining table in their parents’ house.

In this case going with the jargon was a wiser course than going for the plain speak, as the plain speak could raise uncomfortable issues which no Fine Gael TD, let alone the Tánaiste, would wish to flag-up right now.

In the case of these Fine Gael adverts, the message is not about remote working, it is about Fine Gael and about reminding Fine Gael voters across the country, constituency by constituency and region by region, that they are still around and still relevant.

The message is not about noticing this policy or this particular action, it far simpler it is about: Notice us, notice me.

I am not saying that the Tánaiste and Fine Gael does not grasp the importance of the move to “working from home”. But, just like the expectant circus couple who when asked whether they wanted a boy or a girl, replied “we don’t mind, just as long as they fit in the cannon”, the Tánaiste is most focused on how the policy helps him win back all those voters he lost for the party in 2019/2020.

Perhaps, just as Varadkar hopes that talking about remote working helps him to win back the voters his party urgently needs and wants, Donnelly hoped that pandering to the 18-30 years-olds who have abandoned Fianna Fáil in droves, though drove seems too small a word to express the sheer scale of the exodus, would make them think more kindly about his new found party.

The end is not the issue here, it’s the means. Pandering does not work. Though telling people what you think they want to hear can get a temporary bump in the polls, it never works as a long-term strategy. Why? Because, in the long run, voters are not fools. They do not like being played as such and tend to punish those who try to – assuming they have a viable alternative to allow this.

People can cope with the facts when given them straight and in a calm and accessible way. Voters will tend towards the one they perceive as coming closest to this – this is perhaps why yesterday’s Ireland Thinks/ Mail on Sunday poll rated NPHET’s Tony Holohan 6.5 (out of 10) compared with 3.1 for Stephen Donnelly and 3.8 for Micheál Martin in terms of approval.

On an unrelated note, the same poll reports that 85% think the €81k pay increase for the Sec Gen of the Department of Health, due to be agreed by Cabinet this week, is inappropriate.

As I pointed out here over two months ago, they are right and so, I again caution Fianna Fáil TDs and Senators about letting this be nodded though. It is their Ministers who will take the flak for this.

Derek Mooney: Has Martin Thrown His Shared Island Unit Under A Bus?