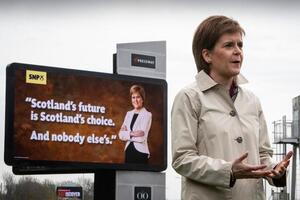 With its bold and direct slogan: Scotland’s future is Scotland’s choice. And nobody else’s the SNP has left Scottish voters in no doubt as to what this election is about. It is not just about deciding about who sits in the Scottish Parliament and who forms the next Scottish Government, it is also about preparing for a second independence referendum.

That is why what happens on May 6 will be hugely consequential for us on this island because. It will set the course for the final steps in the move to Scottish independence and the breakup of the United Kingdom of Great Britain and Northern Ireland.

With 10 days to go, things are looking good for First Minister Nicola Sturgeon’s SNP, but a lot can happen in 10 days, and while the SNP’s dominance is in no doubt, the issue is now whether it can win a majority of seats (more than 65).

On the face of it, securing a majority should be an achievable task. The SNP did it back in 2011 when it won 46% of the popular vote. Right now it is polling close to 50% in most recent polls and the current seat projection on the excellent Ballot Box Scotland website has it set to pick up 6 seats extra and come back with 67.

But securing more than 65 seats is tough as the Scottish parliament was constructed in such a way as to make it “unlikely that one party will get an overall majority” – the quote is from the Parliament’s own information service.

This is due to how the Scottish Parliament’s 129 seats are elected. It uses what is called an additional members system. This means that 73 of the seats are filled via 73 local constituencies electing one member by first-past-the-post. The remaining 56 additional/top-up seats are elected by a modified form of d’Hondt PR from a party list, based on 8 x 7-member regions.

Voters get two ballots, one for their local constituency MP and one for their regional party list. In 2016 the SNP won 59 of the 73 constituency seats, but only 4 of the Regional ones. This is partly because the way the Scottish electoral system calculates d’Hondt, meaning that parties that do well in the constituency elections within a particular region will do less well in that regions top-up calculation.

It is also because many SNP voters have tended to view the second regional ballot as representing their “second choice”. This time around while polls show the SNP set to hit 50% on the constituency ballots, they also point to the party only getting 40% on the regional one.

To address this dilemma, the SNP is pushing a strong social media campaign with the hashtag #BothVotesSNP. If it can push its vote on the regional lists up to a point where it mirrors its support on the constituency lists, then an overall majority could well be in its grasp – even with its former leader Alex Salmond siphoning off votes, around 2-3% for his newly formed Alba party on the margins.

Securing that overall majority is not a sine qua non for Sturgeon remaining in government or for the prospects of a second referendum. There will be an absolute majority for both a second referendum and for independence in the next Scottish Parliament even without the SNP winning more than 65 seats, but the psychological impact in Westminster of the SNP being a single party majority government in a parliament designed to avoid such an eventuality, would be enormous.

That’s why the next ten days are crucial. You can expect to see Boris Johnson’s Tories and the entire British establishment throw absolutely anything and everything at Sturgeon and the SNP. The SNP’s opponents will fight this election as if their lives depended on it… because their (political) lives do depend on it.

This election is about the future cohesion of the United Kingdom. And it is not in Scotland that this is playing out.

As I mentioned here before, while the independence movement in Wales is nowhere near as advanced or as dominant as it is in Scotland, it has been on the rise since Brexit. This was evidenced in the ominous warning sounded in early March by the moderate, pro-union, Labour Welsh First Minister, Mark Drakeford when he told a House of Commons committee that:

“There is no institutional architecture to make the United Kingdom work.”

“It is all ad-hoc, random, and made up as we go along. And I’m afraid that really is not a satisfactory basis to sustain the future of the UK.”

It is further evidenced in recent Welsh polling which shows Drakeford’s Labour party gaining ground and the Welsh independence party Plaid Cymru set to emerge as the second biggest party.

Have those misanthropes who have been beseeching Irish politicos not to mention unity or border polls for fear that it will upset unionism given any thought to how what happens in Scotland will impact it?

What happens in Scotland over the next 10 days, 10 weeks and 10 months will influence Northern Ireland unionist politics more tangibly than the calm and reasoned arguments and proposals on unity they have objected to here.

Unionism’s cultural and historical connection to the United Kingdom is more often expressed through its strong connections and ties to Scotland, than to England or London. Break those and you undercut many of the historical and institutional binds that hold the Union together.

But the fact that what happens both in Scotland and between Scotland and London will profoundly impact unionist thinking, does not mean we should standby passively and wait to see what happens. We must prepare, if only on a contingency basis, for the possible break-up of the United Kingdom and the major changes in relationships that would cause.

What happens in Scotland on May 6 will have medium- and longer-term consequences. But it will also have lessons, which we can learn now.

The first is how a single party, which has been in government since May 2007, looks set to be returned to government for a fourth consecutive term, with an increased vote, an increased parliamentary representation.

There is nothing in our psyche, or in our system, that makes such an achievement here impossible, so it must be to do with the party itself, its leadership and its message.

Having struggled for the first forty years of its existence to win even 1% of the popular vote, the SNP started to make its breakthrough in the 1970s with the It’s Scotland’s Oil campaign and the adoption of a broadly social democratic platform.

The real progress came in the 1990s though, under the inspired and charismatic leadership of Alex Salmond. The party’s support grew dramatically. Within just eight years – from 1999 to 2007 – it went from being the second largest party in the newly created Scottish Parliament to being the largest and the lead party in a minority government.

In the space of under 20 years, the SNP has managed not only to put Scottish independence at the centre of the British political agenda, but to be on the cusp of achieving it. All accomplished using only democratic and constitutional political means, even when it felt the rules were stacked against it.  And all done without ever threatening menace or violence.

The other lesson, one which should be heeded by some in government here, is that being in government during the worst pandemic in a century does automatically lead to plummeting polling numbers. Your poll numbers do not fall just because you are in government, they fall because of what you do (or, more often, do not do) while there.

12 thoughts on “Derek Mooney: 10 Days To A Most Consequential SNP election”