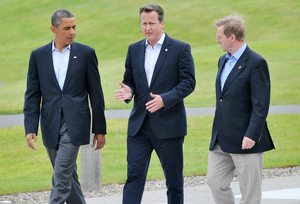 At the G8 summit in May 2013 at Lough Erne in Fermanagh, Northern Ireland were, from left: United States President Barack Obama, British Prime Minister David Cameron and Taoiseach Enda Kenny

Sunday evening’s Reeling In The Years [RTÉ One] included the visit in 2013 by the Obamas, which was a spin off of the G20 summit on Lough Erne.

Around this time, I was doing two Culture Ireland sponsored poetry readings in Washington DC and Huntington, West Virginia. The poem below was inspired by our train journey from Washington to Huntington, which took us through the northern Virginia and West Virginia via the Blue Ridge mountains. At the start of our journey I spotted an Obama ‘Hope’ t-shirt for sale at a knockdown price in a shop in the train station. The poem was inspired by that journey.

At Union Station hope is a t-shirt on sale
at seventy per cent off. Yesterday,
all the bow-tied barristers gathered
in the Hilton Hotel.

At the end of the street
the man from JP Morgan told Congress
investors prefer trophy real estate:
Manhattan office blocks to houses
for the little people.

Out here, the tuxedo gives way
to the pick up truck. Red winter fields
dotted with cattle that will soon be
hamburgers; demolition yards
full of cars that were once
somebody’s dream.

Out here, the taxi drivers are all local
in tiny white towns, each of which
glowers on its mountain side
like a schoolmistress.

Out here, guys
who’d have been happy
to point you in the direction
of the hunting supplies store
if they hadn’t got
killed in whatever war.

Ode To The ‘Far Catholic Right’