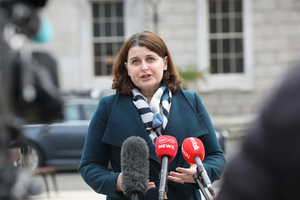 Further to Tanaiste Leo Varadkar’s defence of Ceta, the free trade agreement between the European Union and Canada…

…where he hailed a report by Copenhagen Economics, commissioned by the Department of Enterprise, Trade and Employment, into the costs and benefits for Ireland arising from four recently concluded EU Free Trade Agreements (FTAs) – Canada, Korea, Mexico and Japan.

Jennifer Whitmore, Social Democrats TD and the party’s spokesperson on the environment, climate and communications, writes (full article at link below):

…There is no question but that the Ceta deal will boost trade, but the benefits are lopsided. While Irish exports to Canada are expected to be 31 per cent higher by 2030, imports from Canada will increase by 84 per cent.

The newly published study by Copenhagen Economics for the department, which cost €28,000 to produce, is being used by Varadkar as a rationale for the ratification of the free trade deal with Canada, despite the vast majority of the report comprising an analysis of three other FTAs.

To put this in context, the consolidated Comprehensive Economic and Trade Agreement (Ceta) text is nearly 1,600 pages long. The Copenhagen Economics’ report is just 79 pages – and fails to even mention the most controversial aspect of the deal, the investor court system (ICS), which gives multinationals the right to sue governments who curtail their freedom of action as investors.

Perhaps the Government didn’t have time to commission a thorough report. It had attempted to rush through ratification of this hugely complex deal after just a 55-minute Dáil debate in December. That effort only failed because a sustained public outcry about such a truncated debate forced the Government to defer it.

Now, this fig-leaf report is being brandished as evidence of the Government having done its due diligence when, in reality, it is a cursory analysis of four separate trade deals, which concludes that almost all of the cumulative economic benefits to the State flow from just one agreement, the trade deal with Japan.

It is also noteworthy, that the trade element of Ceta – which has seen the reciprocal removal of nearly 99 per cent of tariffs between the EU and Canada – has applied since September 2017. Therefore the State is already reaping the economic benefits of the deal. The element which has yet to come into force, and which is dependent on EU member state ratification, is the portion of the deal concerned with investment protection, which includes the highly contentious ICS.

In Dáil debates, when concerns regarding the ratification of Ceta are posed to Varadkar, he invariably issues a boilerplate response which includes a vague reference to a sustainability impact assessment undertaken on behalf of the EU into the entirety of the deal.

One wonders if he has ever read this impact assessment, because it unambiguously recommended that the investor state dispute settlement (ISDS) regime, of which ICS is a variant, should be excluded from Ceta and replaced with a state-to-state enforcement mechanism.

Given that the EU’s own impact assessment recommended dropping ISDS from the final deal, it is bizarre it has been retained – albeit, in a slightly improved format – as ICS. Despite these changes, the core elements of the dispute mechanism remain the same. ICS allows large corporations to leapfrog domestic and EU courts and take cases against governments to specially-created tribunals when policy decisions impact their bottom line.

Meanwhile, Ceta’s supposed ability to insulate public policy decisions from attack by investors contains an express exception. If the impact of a decision in important public policy areas is deemed excessive, investors can pursue a case against a member state, even if the policy decision was implemented in the public interest. [More at link below]

Curious about what CETA is and why campaigners are urgently trying to stop the government from ratifying the deal?

It’s not about trade!
That part has been up and running since 2017.

It’s all about the Investment Court System (the #ICS)… (thread) pic.twitter.com/YPVG0JzIWs

Canada: Where The Internet Just Got A little Smaller

12 thoughts on “CETA In Stone”