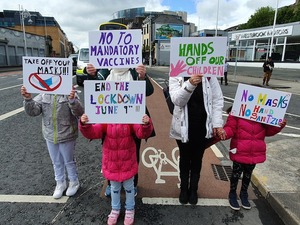 🔴 Ministers have warned vaccine refusers are the “principal threat” to the final lifting of lockdown restrictions on June 21https://t.co/oRCo5ZsinU

🚨 | NEW: There is a moral debate taking place in government with some arguing that they have a duty to prevent deaths among those who refused the vaccine, and others privately suggesting that vaccine refusers cannot hold back the rest of the country, even if some die@politico

"We've got to combat vaccine hesitancy."

Former prime minister Tony Blair says 'part of the problem' with tackling COVID is that some people who are entitled to a COVID vaccine are not getting them.

68 thoughts on “Ruining It For Everyone”