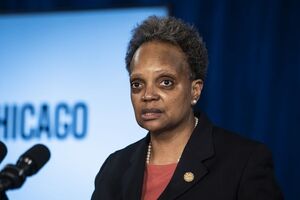 Chicago mayor’s decision to only speak to journalists of color is commendable, not racist https://t.co/8PW46vEQz2

‘The issue here isn’t about Lightfoot herself not wanting to speak to white journalists, as right wing media would like you to believe, but the fact that Black and brown journalists are equally capable and equally as deserving as their white peers and counterparts, but get half the attention. This isn’t an anti-white policy, but a pro-POC one.

‘Media workers of color should be awarded the chance to showcase their skills in a sea of whiteness, as Black and brown media workers have perspectives that have been influenced by racism, discrimination, and living while being a person of color, and the people of Chicago need accessible and attainable information that pertains to their life….’

Chicago mayor’s decision to only speak to journalists of color is commendable, not racist (Independent.co.uk)