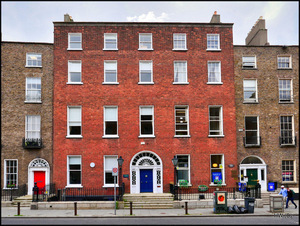 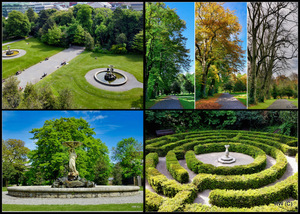 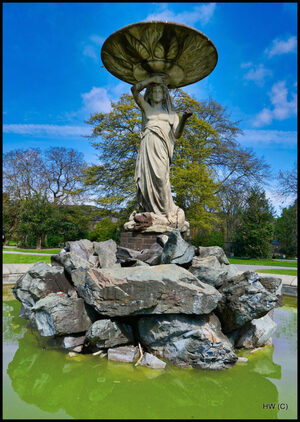 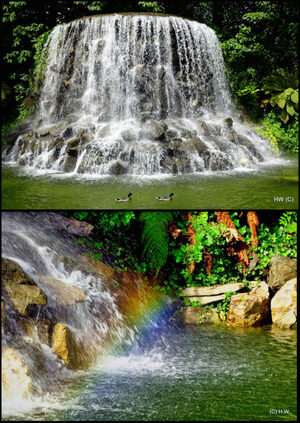 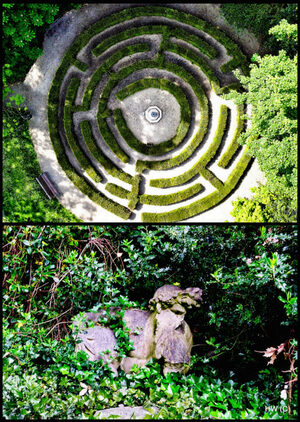 From top: John ‘Copper Face Jack’ Scott’s House on Harcourt Street, where a tunnel took him to his ‘pleasure garden’ now the Iveagh Gardens; water features including ‘Rustic Grotto & Cascade’ are among the remains of the ‘Winter Gardens’ modeled on London’s Crystal Palace

The Iveagh Gardens, a park surrounded by buildings hidden between Earlsfort Terrace and Harcourt Street probably has lost its name by now as being Dublin’s “Secret Garden”, but it was a lovely time back in the 1990s when it opened to the public and few knew about it.

It was easy then to find some quiet solitude amidst greenery in the centre of a busy Dublin. On a fine summer day, it is a lot less crowded than its nearby neighbour Stephen’s Green, a park that can be a bit boisterous, but the Iveagh Gardens itself was not always so peaceful, but more of that anon.

Ever wonder why the well-known nightclub on Harcourt St., is named Copper Faced Jack’s? It’s named after a nearby resident. In 1777, John (Jack) Scott, lawyer and MP, became Ireland’s Attorney General and the title of Earl of Clonmell was bestowed upon him in 1793. When he became Earl of Clonmell, he added an ‘L’ to his name.

Scott to say the least was generally disliked. A notorious scoundrel, he fought four duels in his lifetime, one over his involvement with another man’s wife and he almost fought a fifth for remarks made in the House of Commons against a political opponent in 1773. He was well known to bully and sarcastically ridicule his opponents. Being aggressive and having a ruddy complexion coupled to a scowling visage, it earned him the nickname Copper-faced Jack.

He was a very wealthy individual building a fine house, today’s Clonmel House on Harcourt St. For his family home Jack had a large pleasure garden built, Clonmell’s Lawns, now the Iveagh Gardens.To avoid the great unwashed along Harcourt Street, Copper-faced Jack had a personal underground tunnel built linking his house with his private gardens. Scott passed away on May 23. 1798 and his family sold the gardens in 1810.

The gardens were opened to the public in 1817 renamed as the Coburg Gardens. The pleasure gardens were popular with Dublin’s Georgian gentry, having music and firework displays as entertainment. In celebration of the coronation of King William IV during the summer of 1830, a magnificent fireworks concert was performed at the gardens with the finale being “a correct representation of the eruption of Vesuvius”.

As mentioned earlier the gardens weren’t always so peaceful, in August 1835 a trade union meeting turned into a huge row when Catholic workers assaulted one hundred and fifty Orangemen with “murderous instruments of aggression”.

By the 1860’s the once splendid gardens had fallen into a sad state of disrepair. A commentator of the time notes: “Sheep grazed there, between the piles of rubbish dumped by uncivic citizens”. Nothing new with violence in parks and litter louts in Dublin, eh?

And like many areas in Dublin, a member of the Guinness brewing family came to their rescue. Benjamin Lee Guinness, purchased the land at the back of his house, Iveagh House (now the Dept of Foreign Affairs), as a garden for his town house in 1862. He had the gardens completely redesigned by a famous landscape designer of the day, Ninian Niven, in the style we recognise today.

The Iveagh Gardens retains some secrets. One of its many design features was a boating pond for the Guinness family that has long since been emptied. It was located at the eastern end of what is now The Sunken Garden. This garden was put to use as Ireland’s only archery field. The field being lower than its surrounds helped to protect passers-by from being struck by stray arrows! Another unusual item, the remains of an elephant that died in 1922 after being examined by the veterinary students of U.C.D. are buried under this area today.

Sometime later Benjamin Lee Guinness sold much of the land to the Dublin Exhibition Palace and Winter Gardens Company, building a Winter Garden of glass and iron as well as an Exhibition Palace in brick and stone facing on to Earlsfort Terrace to “provide a permanent exhibition of Irish arts and manufactures and also reading rooms, flower gardens, and a gas-lit winter garden, for public enjoyment”.

The design of the new gardens was based on the acclaimed Crystal Palace of London. The Dublin Builder reported: “It would be quite impossible to convey in a picture any notion to the aspect of the enchantment which the Winter Garden wears under the mystic influence of gaslight…. Anything more exquisite than the effect produced in the grand hall can scarcely be conceived. Long lines of gas jets, carried over the ceiling, afforded the finest contrasts of light.”

On the May 9, 1865, Albert Edward, the Prince of Wales, visited and performed the opening ceremony of the International Exhibition of Arts and Industries. The gardens were very successful for some time but several years later when public interest waned,in 1870, Sir Benjamin Lee’s sons, Edward Cecil Guinness later Lord Iveagh and Arthur Edward Guinness later Lord Ardilaun, bought the buildings and grounds back into family ownership. In 1872, the site was used for an Exhibition of Irish Arts and Manufactures, unfortunately, this venture was unsuccessful and by 1882 the Winter Gardens and its great glass hall was dismantled and relocated to England.

Today some of the remains of the Winter Gardens are to be found in the park including two fountains a beautiful “Rustic Grotto & Cascade”, a water cascade with rockery from all of the 32 counties of Ireland. Other items are the remains of statues lining the path leading east along the avenue from the current rosarium, they were once inside the glass building along here. If you look closely, you will find some partial remnants of statues and demolished stonework scattered about the park’s shrubbery and trees. And in a corner of the park is a fine maze with a sundial at its heart also dating from the Winter Gardens.

Later in 1883, Edward Cecil Guinness sold the stone Exhibition Palace buildings to the Commissioners of Public Works and they were modified to house the Royal University with the gardens remaining as the property of the Guinness family. Further reconstruction work was carried out for the University College, Dublin U.C.D., in 1908 and in 1918. The gardens were later gifted in 1939 by Rupert Guinness, the second Lord Iveagh to U.C.D.

The present façade on Earlsfort Terrace (now the National Concert Hall) was created by the architect Rudolph Maximilian Butler. In 1991 the Government purchased the gardens and opened the 3.4-hectare site in 1992 as a public park that we know and enjoy today.

So, the next time you are visiting the Iveagh Gardens enjoy viewing the water cascade rockery and if the sun is at the correct angle, you may be rewarded with a beautiful rainbow created by sunlight on the spray of the water.