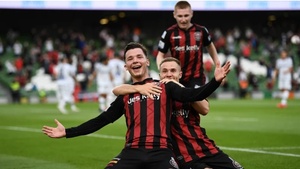 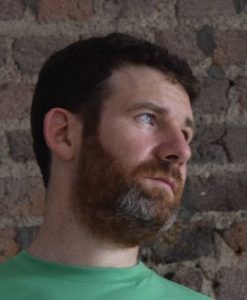 From top: Ali Coote of Bohemians celebrates after scoring the opening goal against Macedonia’s PAOK Thessaloniki at the Aviva on Wednesday; Luke Brennan

Football, that funny old game, often comes down to numbers.

Irish clubs are fond of roulette.

You can do the numbers on this week’s European adventure, Bohemians (Ire) vs PAOK (Gre), as simply as this. The squad value of Bohemians is €1.42M, dwarfed by PAOK’s squad valuation of €65.08M.

To continue with the roulette analogy (No more bets!), making the very unscientific assumption that the squad value determines whether team A beats team B, that would mean that PAOK gets beaten one time in every 40 matches. That equates approximately to the owners of PAOK covering numbers 1-36 on the roulette wheel and Bohemians (for the convenient purposes of this analogy) allowed to bet on Zero.

Bohemians beat the well funded Greek club 2-1 with a mix of youth, grit and that most Irish of things, passion. I’m not sure you can fluke a 2-1, that will be revealed in the return leg in Greece, in Toumba Stadium, know to it’s visitors as “The Black Hell”.

It seems no coincidence that youth is part of the mix in Bohemians’ success, their team including three Irish Under-21 squad members, Dawson Devoy (19), Ross Tierney (20) and Andy Lyons (21). It was even said that the last two gave former Man Utd. midfielder Shinji Kagawa a bit of a schooling.

It seems Irish football is rich with youth and that youth is rich with talent. Perhaps the DDSL (Dublin District & Schools League) has been effective hothouse for talent. Perhaps there are people who care enough about football (of which there are many) are putting the work in at grass roots, in the clubs, despite the FAI and all it’s disfunction. Perhaps we are just rich enough to afford and care for a generation of sports stars.

Either way, I’m glad things have moved on, I remember well being asked by a hairdresser in the 90s what football team I supported, I told him I supported Shamrock Rovers, which he thought was hilarious.

If Bohemians beat PAOK next week, the formula will not need to be re-written, but a re-evaluation of Irish football and Irish footballers will be required. Perhaps there is gold in their boots after all.

To give a further update on Ireland’s young guns, just a few weeks before the Irish U21 team kicks off their first group match (I’m tipping them to win their group, qualify for an U21 Euro finals for the first time, get to at least the semi-final, allowing them to qualify for the Olympics in 2024, which they win in the centenary year of the Republic’s first football game, allowing them to build the team spirit which will bring a core of players through to win the World cup in 2030). They’ll come close in 2026, but the lessons learnt will drive them on for 2030.

Things are hotting up nicely. You could now create a team of Irish U21 footballers who has a realistic chance of playing in the top European leagues this year.

The goalkeepers are the biggest stretch. Gavin Bazunu would have to be recalled from loan to play for Man City. There are number of defenders that are looking to make an impact this year in the Premiership this year, Nathan Collins had a big money transfer to Burnley (£17M) making him the most valuable Irish player around, the sort of money that forces a club to make him play. Andrew Omobamidele at Norwich looks just as good a player. Jake O Brien, from Cork, was so impressive in captaining Crystal Palace’s U23 team, he was shifted up to play senior in the pre-season.

In midfield, you could have Conor Coventry, who got a couple of goals and a Man of the Match award under his belt for West Ham seniors pre-season, think Declan Rice with a better passing ability. Ryan Johnasson has being getting game time at Sevilla, playing friendlies with the likes of PSG and Roma in the last few weeks. John Joe Patrick Finn has been doing the same at Spanish side Getafe, getting game time, while committing to joining Ireland’s U21 for their first outing of the campaign. There is also a German based contingent; Conor Noss has been scoring goals for B. Moncheglabach in the Bundesliga, 2 goals in 4 matches during July. Wolfsberg’s Anselmo Garcia McNulty, Irish mother, Spanish father, captain of the youth team, has been moved up to training with the senior squad.

Up front, there are a growing number of options. Aaron Connolly seems to be maturing into a player that will start when fit at Brighton. Adam Idah has scored 4 goals in 4 pre-season games for Norwich as they re-enter the premiership, making his presence felt, as they say. Michael Obefemi seems to have put his injury worries behind him, he may well start matches for Southampton, Danny Ings has left for Aston Villa, Shane Long is looking like moving towards the great big premiership glue factory in the sky.

There are others too, boy wonder Armstrong Oko-Flex moved down from Celtic to West Ham, then immediately returned to play Celtic in a friendly at Celtic Park, scoring a goal against a team he couldn’t get a start for, which must have felt like a special moment in paradise. Paradise is what they call Celtic Park, although it has been something of a purgatory for young Irish players of late.

There are others who have trained with senior top level clubs, made the bench, but the real prospects for the Irish team lie in the lower divisions. You could put a team together from Championship level players, notably Jason Knight (currently injured a result of a training ground tackle from his own manager, Wayne Rooney) at Derby and 3 others there.

But the standout Championship player should be Gavin Kilkenny for Bournemouth. He took at bit of time to get to grips with the Chelsea midfield when they played a July pre-season friendly, but when he did, he pulled them apart and created a goal which had the European champions scrambling for dignity with two late goals. A MOTM performance last week has new manager Scott Parker wanting him to show to the world what he’s got.

So that’s where we are, greatly improved, moving at a glacial rate, but as Declan Rice used to say “Tiocfaidh ár lá”.

Luke Brennan is an Ireland born, Portugal-based writer and entrepreneur and regularly appears on Broadsheet on the Telly.

God Save The Queens