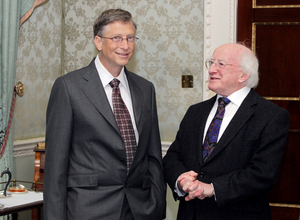 From top: Bill Gates with President Michael D Higgins in Aras an Uachtarain in 2013; David Langwallner

There has been a recent proliferation of books, papers, articles and broadcasts about the political and social malaises we are facing – unprecedented in human history or at least since the 1930s. There is a significant level of repetition and overlap between these disaster apocalypse texts, the overarching themes of which are the following:

– humanity is on the brink of economic and environmental collapse and potential extinction by increments exacerbated by this pandemic and future pandemics to come;

– travel is to be a thing of the past or restricted; and

– the world in which we live is to be a no-work no-support lockdown or stop-start universe with scarcity of opportunity and serf or Chinese capitalism at best for most.

Given this deluge of material what more is to left to say – why one more short or medium essay?

Well, dear reader, if there is to be one more the apologia and justification for this epistle is that it brings all the themes together and identifies in a legalistic yet easily digestible coffee-read fashion the precise person that all ills can be traced back to – the precise if somewhat opaque criminal entity that has caused all of this.

The Case Against Bill Gates.

Let us address the particulars then:

1: Our age of spin and disinformation has morphed into a post-truth universe where the untruth is given excessive audience or hearing and lies and propaganda are accepted or inadequately or inconclusively rebutted. The utilisation of propaganda, advertising, sound bites, and the manipulation of people by targeting and messaging emanating from Cambridge Analytica has destroyed our public discourse. People are being commodified and objectified and targeted as passive nodal consumers or receptors of disinformation. Human personality is being readjusted towards plasticity and falsity. Relativism and alternative realities abound. This artificial truth and information is creating artificial humans. Genuine people are being replaced by artificial people and artificial intelligence – replicants or indeed a kind of zombie, or both. And Gates is partially to blame as Microsoft by stages led to the veneration of tech and numbers, blandness and the unregulated wild west of the Internet that has created the platform for the new post-truth universe. All roads lead to Bill.

2: Neoliberalism, an American adoption via an Austrian economist Hayek, has led to the cartelisation of the world, with a small minority controlling most of the assets so as to blur to non-existence the distinction between working and middle class. Privatisation, deregulation, oligarchical and corporate control as well as the rewarding of human identity to homo economicus has corroded the fabric of life and coarsened human interaction. It has also destroyed pension entitlements, health care rights and the social safety net. Insidiously it has led to the rise of fascism and America has led the triumphalist Trumpian march or should that be Gatesian Corporate march. For the new form of feudal capitalism makes Gates ever the richer and ever the more dangerous with the vaccine rights in his pocket. Gates dispenses largesse to humanity and seeks to turn us all into cleansed corporate serfs with appropriate vaccines which we pay for.

3: There is indeed now a cacophony of voices asserting that we are at the dawn of a new fascist or corporate fascist mercantile age. Those among the ruling elite of the world who have perspective and a historical sensibility such as Madeleine Albright are acutely conscious that the extreme right and neo-conservatism has gained not just traction and control but is becoming all powerful. Yes, it is fascism but what type of fascism is the more appropriate question? Well, it is a synergy between faceless corporate control manipulating a compliant and often failed state, failed states worldwide, the repression of civil liberties and the degradation of human rights where state criminality is given a free license and where tactics of surveillance, fabricated allegations and state sponsored murder have become de rigeur. It also accepts entropy and non-support of superfluous people and neglects their basic survivability. Politicians are puppets and the puppet master – he who pulls the purse strings through entities such as the Gates foundation.

4: The culture of celebrity and soundbites and infotainment has destroyed public discourse and provided a palliative distraction of bread and circuses as far more sinister matters are not reported or discussed or are occluded from public visage gaze and scrutiny. Politics in effect as the Trump-Clinton debates showed has become the Jerry Springer show. It is now part of the infotainment industry, with celebrities like Gates given far too much coverage for their ludicrous views, and far too much credence based on their ill-gotten gains.

5: Education has become an industry, achieving limited employment goals and frankly not providing education but producing arcane specialists and technocrats, with a misplaced focus on sentiments, feelings and all pervasive soft focus woolliness to the detriment of hard data. Students are encouraged to focus on self and self-validation and on lifestyle choices rather than what Camus called engagement. The Americanisation of education and the expurgation of fearless criticism to protect our snowflake generation are producing, with some exceptions, a population ripe for exploitation. Be merry and libertarian for your noncritical college career and then be exploited for the rest of your life through precarious short-term contracts, student loans, permanent renting, overwork, meaningless exchanges of sentiments and a false sense of belonging in corporate cultures or on the web as detailed in ‘The Circle’ parodied by David Eggers and modelled on Microsoft and Apple.

6: The rise of family values and religious fundamentalism intrinsic to neo-conservative thinking and now with the new Trumpian appointment of a seven-times mother, gun toting and approving, no doubt, anti-abortionist devout Catholic Amy Coney we have reached the nadir or apotheosis of absurdity. Neo-cons scapegoat Islam but do not turn the lenses on themselves, with many conservative extremists looking forward to the end of days where the righteous will be judged and unrighteous shot or interned, neglecting of course to recognise that they collectively by their rapacious greed have caused all this mess in the first place. The good old boys and girls, the rednecks and the bang for the buck merchants. The hillbilly elegy that worked its way up to the dizzying heights of Goldman Sachs or Microsoft. Take a bow Bill. Bow wow wow. You may consider yourself an altruist but your endorsement of free market neo-liberalism has pandered to all of this. And the Democrats are no different.   The costing of everything has destroyed the social fabric and precipitated economic and environmental collapse. All human activity converted into the wealth maximisation criteria. Homo Economicus. It is also the cult of scientificism, the dock devoid of moral conscience that is in the dock. Just as listening to Niall Ferguson in Imperial College one should realise; he is funded by the Gates Foundation. Scientific objectivity that is Decisionist, as Habermas would term it, is devoid of a moral compass.

So, these are the themes of the industry of apocalypse and millenarian self-destruction linked to Americana with the counterpoint of a rather soapy counter active optimism leading to a plethora of self-help books or rules for life and survival in the 21st century.

It is almost as if we have entered the parable millenarian universe of Cormac McCarthy’s book ‘The Road’ (2006) and are struggling for survival in an all-consuming neo-liberal holocaust. Survival skills are personalised and individualistic and involve disentanglement from the body polity and the corporate vectors of control. If not, you become part of the problem – earning for your keep singing to your sponsors for your supper without having the temerity of Oliver Twist to ask for more, retreating into your gated enclosures to take your medication, testing, ever more vaccines, and restriction of liberties, without causing any fuss. In other words, a sheep.

How do you indict in the face of a sleepwalking consensus and how do you particularise those responsible? You cannot indict everybody, but I think some clarity can be imposed with the indictment of a specific even amorphous entity.

Robertson QC titled a book “The Case Against the Pope” (2010) and Hitchens attacked Henry Kissinger in his “Trial of Henry Kissinger” (2001). Kissinger is of course a person (or at least ostensibly so) and thus subject to universal jurisdiction, but is part of the military industrial complex and the Pope fronts a business called Catholicism or as I think it should be termed “In God We Trust Inc” responsible for much of the evil of the world.

There is accordingly journalistic precedent for constructing a generic indictment that is not just individual focused, but entity focused – perhaps not an indictment that would be recognised in the law courts, but one which may be recognised in the court of public opinion – or at least the court of civilised values and intelligent non prejudicial thinking. A court awaiting a class action.

How do You Plead Mr Gates?

David Langwallner: The Hedgehog And The Fox

45 thoughts on “David Langwallner: The Case Against Gates”