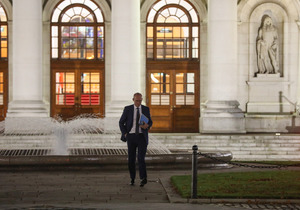 Minister for Foreign Affairs Simon Coveney departs the grounds of Leinster House following the defeat of a Sinn Féin vote of no confidence over his botched handling of Katherine Zappone’s UN appointment.

An allegation made in the Dáil yesterday by Sinn Féin politician Matt Carthy about Minister Simon Harris was “appalling” and “an abuse of Dáil privilege”, a Fine Gael TD has said.

A spokesperson for Minister Harris said the accusation amounts to “a clear misuse of Dáil privilege and it’s untrue”.