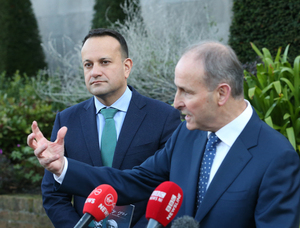 Political commentators hailing a minister who was on maternity leave for half of 2022 as their politician of the year tells you a lot about the state of Irish politics.

Not that I particularly object to their choice of Minister Helen McEntee. Her absence from the cabinet table at a challenging time did nothing to diminish her public profile, while the positive media treatment of her return, did much to enhance it.

Minister McEntee is one of the few recognisable names and faces around the Cabinet table. She has become a political figure in her own right, albeit one who is still untested – a point I made here last February.

This is not something you can say about all her colleagues. While some do stand out as individuals with thoughts and ideas of their own, most come across as either politically shapeless or just innocuous. Mercifully the Taoiseach and Tánaiste have not required certain ministers wear nametags at meetings, if What’s My Line ever returns to our TV screens, the panel would have some trouble discerning precisely what the Minister for Children or the Minister for Agriculture do for a living.

(Disclosure: that gag about ministers wearing nametags at meetings is a shameless recycling of a joke I wrote for a Fianna Fáil Árd Fheis warm up speech almost two decades ago. The original, a put-down of the Fine Gael front bench, went: “The FG front bench is so anonymous that Enda Kenny has insisted they wear nametags at meetings.”

Slightly fuller disclosure: This was the cleaned-up version. The original was: “The FG front bench team are so unknown that they spend two hours together every Tuesday trying to figure out which one of them is Olwyn Enright*.” (*Olwyn became a spokesperson within weeks of her election as a FG TD. She quickly proved herself an effective communicator).

Looking at the current cabinet line-up could almost make one yearn for such colourful or animated characters as Shane Ross, Katherine Zappone or even Charlie Flanagan.

Stop. I see what I did wrong there. I went too far… way too far. Let me go back a step or two.

Throwing a Shane Ross type figure in to this Cabinet would not help matters. Though he understood political communications and had a greater penchant for attracting attention than some of the current crew, this cabinet’s problem is not just one of communications. It is the direction, or lack of, of the government as a whole.

Blame for this lack of cohesion and direction lays with the ones at the top of the three parties… the ones who decided which ministers should sit around the table and what portfolios they should hold.

The fact that political pundits are now openly touting Minister McEntee as a possible next leader of Fine Gael, is instructive. Where it may be due in part to her youth, her gender, or her being clearly identifiable, it has probably more to do with her being one of the few ministers not immediately associated with either failure or ineptitude – her association with the Justice Woulfe appointment saga notwithstanding.

It is a sad reflection of the state of centrist Irish political leadership that simply not being associated with failure could be perceived as a qualifier for the top job.

So, while we wait for the two main government parties to come to their senses and tackle their leadership issues, it is interesting to see those same two leaders trying to turn the tables.

Over the past few weeks both the Tánaiste and Taoiseach have both spoken about the chances of a reshuffle. The Tánaiste got the ball rolling in mid-December telling his parliamentary party that he intends to reshuffle the Fine Gael team when he becomes Taoiseach again next December.

“Leo has put the ministers on warning that if they don’t deliver their agendas for next year, decisions will be made next December,” a most helpful Fine Gael source told the Irish Examiner.

While Varadkar may have framed it as a strong leader pushing back against Paschal Donohoe’s alternative vision for Fine Gael, as set out in his Irish Independent interview, others saw it differently. What they heard was a hollow threat from a leader whose own survival seems in increasing doubt as the #leotheleak investigation rumbles on without conclusion or exoneration.

Not content to stand idly by and watch the Tánaiste do a solo reshuffle fumble, An Taoiseach decided to get in on the act. Late last week Micheál Martin told the UK Times Irish edition that he is unlikely to undertake a reshuffle when he becomes Tánaiste at the end of the year, adding:

“I am of a view that consistency of policy and delivery is important… Chopping and changing all of the time might look good for a day or two, but nothing can beat the substance of getting real change.”

He does have a point… but mainly as a counter argument to some imagined call for a state of perpetual reshuffle. No one is suggesting that. The mid-point of a term of government is an eminently sensible time for leaders to briefly take stock and review if their policies are being delivered consistently, if at all.

Government mid-point is a natural inflection point, one that the revolving Taoiseach model, which Martin has backed so enthusiastically, has elevated into even greater significance.

As I pointed out here before, the only other place where this revolving premiership model has been tried, Israel, also rotated other key ministries at the mid-point. Will Ministers McGrath and Donohoe rotate portfolios next December too? Or will the government post December 2022 have both a Fine Gael Taoiseach and Finance Minister?

Where Fine Gael TDs and Senators detected a strong element of there “terrors for children” in Varadkar’s reshuffle warning, Fianna Fáil TDs heard near deafening echoes of Martin’s passive late 2018 renewal of the confidence and supply arrangement with Fine Gael.

Those same Fianna Fáil backbenchers, including many who have never publicly uttered a word of criticism of Martin, also heard the current leader firmly close the door on their individual hopes of promotion. It seems that Martin thinks keeping his current ministerial team content is far preferable to keeping them on their toes.

It’s a novel approach. It may even appear to make sense in a party where the 14-member ministerial team is just four critical votes short of a simple majority in the Dáil parliamentary party which has 36 members (38 minus 2: Ceann Comhairle and the unwhipped Marc McSharry).

Martin has several capable and determined former front bench spokespersons (pre 2020 election) languishing on his back benches. They are rarely, if ever, asked to officially represent the party on media gigs and have found the party’s Leinster House corridors a cold place.

So, is turning it into an even colder place really the wisest move for a leader who hopes to lead the party in the next election? Martin may believe punters will interpret this as a strong leader being resolute and ruthless. I think they will see it for what it is… a weakened leader trying to act tough by pushing compliant colleagues around, while retreating from showdowns with his real political enemies.

Martin’s approach is not one you will find mentioned anywhere in Prof Gary Murphy’s superb biography of Charlie Haughey. While people will disagree on what he did with it, no one can deny that Haughey understood the exercise of power. In Chapter 15 Murphy offers an insight into Haughey’s approach to both power and people management with a story from his first few days as Taoiseach.

According to a senior civil servant, Haughey quickly moved to reassure senior officials that his legendary ruthlessness was reserved for his political enemies alone, saying:

Micheál Martin take note. And while you are at it, also take note at how badly your party HQ’s latest wheeze is going down. As revealed in last weekend’s Irish Mail on Sunday, Fianna Fáil has engaged former Fine Gael minister and media pundit, Ivan Yates as a communications adviser, inviting him to coach Fianna Fáil representatives, including ministers, on sharpening their political message, no less.

We are just four days into 2022 and already is has not been a great start to your final year in office.

Derek Mooney: Putting A Shared Island In A Shared Seanad

19 thoughts on “Derek Mooney: To Reshuffle, Or Not – That’s The Question”