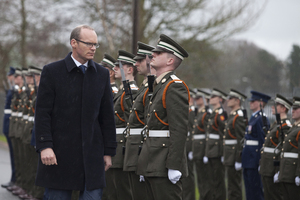 After a decade of defence issues being pushed so far down the political agenda that you’d need a bathysphere and a decompression chamber to even spot them, they came roaring back up that agenda this week. With a vengeance.

Each day brought a new story. It started with the concern over the build up of Russian forces on the Ukrainian border and the not unconnected tumult over Russia’s plans to mount naval exercises in Ireland’s exclusive economic zone.

It then continued with the policy-making-on-the-hoof announcement by Taoiseach Micheál Martin and the Communications Minister Eamon Ryan that they plan to come up with a plan to close Cathal Brugha barracks and use it for housing.

This “plan” was quickly exposed as mere whim, when our part-time Defence Minister told the Dáil that while there would be a feasibility study, there definitely was “no predetermined outcome”, even if it is “…an issue on which the Minister, Deputy Eamon Ryan, has firm views”.

Regrettably, our Defence minister lacks Ryan’s capacity for firm views, even when it comes to commitments he made. The Women of Honour discovered this during a disappointing meeting with Coveney. Hopefully this morning’s engagement with An Taoiseach will be more productive.

Then, to finish off a week of difficult defence headlines, the front page of the Sunday Independent led with: Defence Forces admit they cannot meaningfully defend Ireland.  A story based on some extracts from the Commission on the Defence Forces draft report.

The one thread that connects all the above is the decade long denial of political attention to both the Defence Forces and defence policy. We see this in the way the story about the Russian military exercises emerged and played out.

It has long been the custom and practice for the Defence Forces Chief of Staff of the day to start off the year with a cup of tea and a sponge cake with the individual members of the diplomatic corps.

Even calling these encounters “meetings” is to overstate their significance. There were simple courtesies extended by the Defence Forces to the various Ambassadors based in Dublin. An opportunity to say hello and exchange pleasantries for a organisation that values its role in UN peacekeeping.

They are non-controversial engagements. They should still be. The fact that the Russian ambassador saw fit to widely publicise his meeting, tells you a great deal more about the Russian embassy’s “active measures” agenda here, than it does about the Chief of Staff

Simon Coveney has done almost four years as Defence Minister and is now on his third Chief of Staff. He knows about these courtesy calls at the Chief of Staff’s office at McKee Barracks, so there is no excuse for him telling theFine Gael parliamentary party meeting that he was “surprised”.

I have no doubt the Minister was embarrassed when the photo appeared online courtesy of the Russian Embassy’s Twitter account. I am certain that he was truly scarlet when his Fine Gael colleagues took him to task over it. That said, I bet he was not nearly as disconcerted as the Chief of Staff and his senior officers were when they saw it.

Nor as perturbed as the officials in the Minister’s twin departments of Foreign Affairs and Defence were by their own failure to anticipate that the Russians would use and abuse a courtesy call on the eve of announcing a major naval exercise in Irish waters.

Rather than further embroiling the Chief of Staff in what everyone now accepts was an unwise engagement, perhaps Coveney might focus his ire on the behaviour of the Russian embassy. If he needs any pointers on dealing with the Russians, he could do worse than consult with Brendan Byrne of the Irish Fish Processors and Exporters Association, whose own encounters with the Ambassador delivered results worthy of the Sopranos.

While the Minister focused on the minutiae, the Russian exercise has focused attention on the glaring gaps in our ability to monitor, never mind protect our waters and the critically important infrastructures that pass under them.

Three years back the 2019 Defence Force Review (which I have discussed here before) highlighted the fact that three quarters of all the transatlantic cables in the northern hemisphere pass through or near Irish waters. Cables that deliver over the vast bulk of all data and information transmission. What has been done since? Nothing. In fact, Defence Force preparedness is lower now than it was then with half the naval service’s nine ships regularly out of service due to staff shortages

Not that all the blame attaches to Minister Coveney. Though an ineffectual minister at best, he still tries, in his own words:

“…to look after the interests of the Defence Forces”.

Can we say the same about An Taoiseach, Micheál Martin? The evidence does not favour him. After committing, in opposition, to appointing a full time Defence Minister and giving defence policy the political prominence it merited, Martin blithely forgot all that when the seal of office was handed to him and defence was push back down the political agenda.

How else can you interpret his telling the Housing for All update press conference last week that:

“I’m pleased to confirm we have now agreed to conduct a feasibility study for the use of the Cathal Brugha Barracks site in Rathmines, Dublin to provide housing”.

Who, apart from the father of this idea Eamon Ryan, imagined it would make sense to deflect attention from real progress in delivering on the Housing for All plan, to talk about some notional scheme to close a working barracks that would take years the guts of a decade to only deliver 1000 houses? (Minister Ryan’s estimate, not mine)

Not Housing Minister, Darragh O’Brien, that’s for sure. This is the second time the ebullient pharaoh of Fingal has had to silently stand by as his party leader sabotages news coverage of the work he supposedly wants to promote. last September I discussed Martin’s petulant upstaging of the Housing for All press launch.

Cathal Brugha Barracks in Rathmines is not some unused vacant site. It is home to the 2 Brigade headquarters plus the 7th Infantry Battalion, as well as the Cavalry Squadron and a range of 2 Brigade combat support, combat service and training units. Not to mention the Defence Forces Reserve, the Army School of Music, the No 1 Army Band and the Military Archive.

Assuming that the Taoiseach wasn’t hoping the Defence Force personnel retention problem would look after it, to where was he planning to move the thousand plus troops, while his hoped for building work goes on?

Has he forgotten how long it took for the barracks closed in 1998, including Murphy barracks in Ballincollig, to be redeveloped? Clancy Barracks in Islandbridge, which looks well now and shows how listed military buildings can be incorporated successfully in a modern residential and commercial setting, still sat idle for the best part of 14 years. And that was a wholly private development.

It’s the equivalent of declaring that you plan to develop the St Vincent’s hospital site for housing, before giving a single thought to where you’ll put all the staff and patients.

I was reared in Rathmines. I know Cathal Brugha barracks well, but I am not so emotionally attached to the facility that I cannot imagine it as anything other than a barracks.  I once even fostered the notion of moving the entire military establishment from Cathal Brugha to a modern barracks at Casement Aerodrome in Baldonnel, but only after first moving an enhanced and expanded Air Corps to a new purpose-built facility with longer runway access at Shannon Airport.

But, until I could identify where you would find the extra 100s of million Euros needed to pay for all of this expansion, I kept the notion as that: just a notion.

What a pity the Taoiseach and Minister Ryan hadn’t the cop on to do the same. A single Euro spent now on their planned feasibility study would be a Euro wasted – and given how the last few governments have cut defence spending to the bone, that is not something to brag about.

In a few weeks we shall hopefully see the full report of the Commission on the Defence Forces. I look forward to commenting on it when it is published as it will offer the best opportunity, since the 2000 White Paper, for a grown up conversation on how we create a Defence Force that’s resourced to meet the modern threats we face and project the type of country we wish to be.