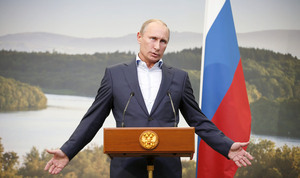 From top: Russian President Vladimir Putin during the G8 summit at the Lough Erne golf resort in Enniskillen, Northern Ireland in 2013; Dertek Mooney.

The most ridiculous and obsolete phrase you will hear in any Irish debate or discussion of the Ukrainian crisis is “… but Putin has a point.”  It is rarely uttered in isolation, but rather as the curt follow-up to an insipid denunciation of Putin’s blatant aggression. Suggesting that while Putin is doing the wrong thing, he may have understandable motives.

This is utter nonsense. The notion that Putin’s threat to his smaller western neighbour has anything to do with NATO or the prospect of Ukrainian NATO membership is absurd. There has been no major expansion of NATO membership in recent years, indeed only two counties have joined NATO since late 2009 and both of those are well over 1400Km south west of Ukraine’s western border: Montenegro in 2017 and North Macedonia in 2020.

The biggest expansion in NATO’s membership happened back in 1999 and 2004 when ten countries, including three Baltic states that were once part of the Soviet Union and several former Warsaw Pact states, joined.

Are we to believe that Vladimir Vladimirovich Putin was so distressed by this 2004 move that it has taken him 18 years to regain his composure and respond?

In reality, the threat to Ukraine has nothing to do with the possibility of NATO membership and has everything to do with that country’s very gradual, even faltering, emergence as a modern democracy that looks to the West, not its overbearing eastern neighbour.

There are other factors too. Not least of these is the long-running dispute over the Russian gas pipelines that stretch across Ukraine carrying much of Europe’s natural gas. Ukraine has been charging higher and higher transit fees, so much so that Russia has developed Nord Stream 2 a 1,200-kilometre undersea pipeline from Russia to Germany. Ukrainian president Volodymyr Zelensky called Nord Stream 2 “a dangerous political weapon”. Others agree, though not the German government, which is heavily dependent on Russian natural gas.

Putin’s NATO expansion claims and fears are bogus. They are a deflection. An effort to conceal the real purpose by diverting attention to a fake one. It is just one tactic, one of the smoke and mirrors ploys from the Soviet era Maskirovka military handbook. Maskirovka loosely translates as “something masked”, well-practised deceptions that include the infamous: false flag.

We see this in operation this week as official Kremlin approved media repeat the ludicrous claim by Putin’s Press Secretary Dmitry Peskov that: “Russia has never attacked anyone over the course of all its history”. This will come as news to the Hungarians (1956), Czechs and Slovaks (1968) and Lithuanians (1991), to mention a few.

The same Putin approved media outlets claim that Russian the build-up, by land and sea, around Ukraine is only to protect the pro-Russian residents of the Donbass region of eastern Ukraine from alleged shelling attacks from the Ukrainian military. So the Putin logic is that Russia is ready to reluctantly invade Ukraine to stop Ukraine from invading Ukraine? This includes a Russian military build-up along the Belarus/Ukraine border, which up to 1000km away from Donbass, but only 200km from Kyiv.

The false flag is one of Putin’s favourite political tactics. Indeed, he may possibly  owe his tight and long-lasting grip on high office to a vicious and blood curdling false flag operation. A false flag that is said to have been perpetrated against Russian civilians. A false flag that very few of those who imagine “Putin has a point” might care to acknowledge.

One of the great question marks about Putin’s meteoric political ascent at the very end of 1990s was: why him? Where did he come from and how did a former secret service boss with no previous political experience or history emerge as Boris Yeltin’s final Prime Minister and his chosen successor as President?

By late 1998, a year before Putin’s nomination as Prime Minister, Yeltsin’s presidency seemed doomed. It was beset by a wave of domestic and international scandals, including accusations that members of his family had accepted kickbacks from a Swiss construction company. Yeltsin’s Kremlin was losing political ground to a new political alliance centred on former Prime Minister Yevgeny Primakov and Moscow Mayor, Yuri Luzhkov.

It was a war, with Chechnya, which enabled Yeltsin to seize back the initiative. On August 7, 1999, 2,000 assorted Chechen, Dagestani, Arab and Wahhabist militants invaded Dagestan. On 9 August 1999, President Yeltsin nominated Putin as one of three First Deputy Prime Ministers and acting Prime Minister of the Government. Putin had just served 5 months as Secretary of the Security Council, and barely a year as Director of the Federal Security Service, the FSB, the successor agency to the KGB.

Less than one month later, between September 4-16, explosions destroyed four apartment blocks in Moscow, Buynaksk, and Volgodonsk. The bombings, which targeted innocent civilians, killing more than 300 and injuring well over a 1000, rocked Russia.

Putin, who was still not well known to the wider Russian public, acted decisively and firmly. He quickly blamed the bombings on Chechen rebels. He vowed swift and immediate revenge and assumed personal direction of the attack that was to become known as the Second Chechen War.

Things were now happening fast in the Kremlin. As Putin pursued his military action against the Chechen rebels, Yeltsin announced on December 31 that he was resigning immediately as President, six months before the end of his term, and that Putin would succeed as acting President.

Within hours Putin had signed a presidential decree granting Yeltsin and his family immunity from any corruption or bribery investigations. He later granted similar immunity to Oligarchs who had prospered corruptly under Yeltsin.

Putin, who by now had become immensely popular for his firm resolve, seized the political initiative. The Presidential election planned for June 2000 was brought forward to March and Putin, a political unknown only two years earlier, was elected with 53% of the vote.

As David Satter, an author and Russia scholar has set out very many times in various articles and books and in testimony to the US Congress House Foreign Affairs committee; from the very start there were doubts in Russia about who planted the bombs.

Yeltsin’s political opponents, who had thought themselves poised to take power at the June 2000 election immediately suspected that the whole thing was a false flag calculated to protect Yeltsin and his entourage by ensuring that Putin, who would protect Yeltsin, succeeded him.

There was more than just their misgivings fuelling the doubt. Within days of the four apartment block bombs exploding, a fifth unexploded bomb was found in another Moscow apartment block. Though initially thought to be the work of the same Chechen terrorists, local police quickly discovered had actually been planted by FSB agents.

Nikolai Patrushev, a Putin loyalist who had succeeded him as FSB head, eventually conceded that his men had planted the bomb, which he claimed was a fake, and insisted that it had been planted there as part of an FSB training exercise. A public training exercise carried out during a terrorist attack on Moscow?

It was not the only inconsistency. By March 2002, the Noviye Izvestiya learned that Gennady Seleznev, a supporter of Putin and speaker of the Duma (Russian Parliament) had announced news of the Volgodonsk bombing on September 13. Three days before that particular bomb exploded.

Many of the those who have worked over the years shed light on truth behind the apartment bombings, including Sergei Yushenkov, Yuri Shchekochikhin, Anna Politkovskaya, and Alexander Litvinenko have been murdered. And while we understandably focus on Putin’s threat to Ukraine, we risk forgetting that the latest in a long line of Putin political opponents, Alexei Navalny is once again on trial, after spending a year in a maximum-security prison.

So, where are the big public protests outside the Russian embassy? It seems that the peace protesters who can find their way to the US Embassy in Ballsbridge for an instantaneous protest… blindfolded… cannot locate the Russian Orwell Road compound. You’d imagine all the folks who usually organise those Ballsbridge protests might remember how to find their way back to Orwell Road?

Let’s hope the Russian Ambassador can find his way to Iveagh House to receive a well-earned carpeting if Russia does invade Ukraine. And that his is able to find his way back again there again in the event of cyber attacks on critical Irish infrastructure… assuming he hasn’t been sent home by then.

7 thoughts on “Derek Mooney: The Czar Of False Flags”