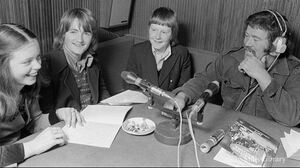 (Radio host Liam Weldon with three unidentified teenagers in an image taken in the Liberties, Dublin by  Ronan Lee in May,1975)

“We are looking for help identifying these three teenagers who participated in RTÉ’s experimental local radio broadcasts from Dublin’s Liberties, which took place from 8-18 May 1975.

The three teenagers are pictured here with presenter Liam Weldon.”

“The RTÉ Guide of 9 May 1975 published an article about these broadcasts, which coincided with the annual Liberties Festival. Similar broadcasts took place from different locations throughout Ireland in 1975 and 1976, with Liberties Radio again going on the air in May 1976.”

“This experimental broadcast from the Liberties Festival was available only on VHF within a radius of approximately two miles from the transmitter in the Mobile Radio Unit which was located near Taylor’s Hall on High Street.” 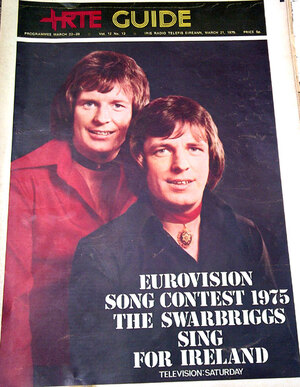 Take it away boys: