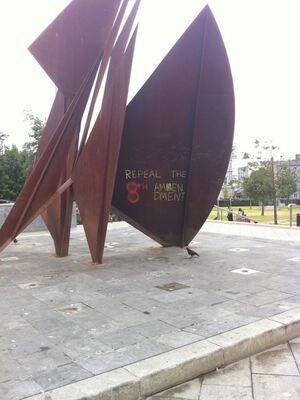 STP writes via the Broadsheet App:

Eyre Square, Galway this afternoon. Amen to that. 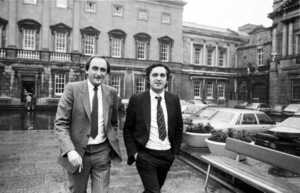 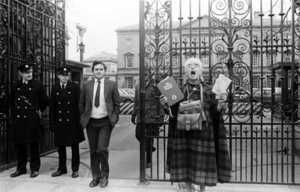 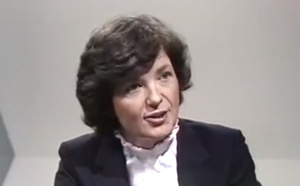 Mary Robinson on ‘Today Tonight’ with John Bowman debating Professor William Binchy after the passing of the ‘pro-life’ Eighth Amendment to the Constitution in 1983.

John Bowman: “Might there be test cases on this though, do you think?”

William Binchy: “Certainly, all I can say on this issue is that em..I think it’s fair to say that the past six months the spectre of women’s life being at risk by reason of test cases being taken to the court. This has been raised and I’m glad to say that the people having considered that particular argument have manifestly rejected it by their vote today.”

Binchy: “May I say on that the courts are open to everybody. Mary if you recall took a case on behalf of a client against the holding of this referendum and the result was she lost that case as the court considered the issues involved. Similarly in the area of women’s health where if some crackpot were to take a case in this particular area the court would dispose of the case with no difficulty whatsoever.”

Bowman: “Mary Robinson, do you think there will be test cases?”

Mary Robinson: “I must say I don’t like the use of words like crackpot we’re talking about very serious issues and I, together with a lot of lawyers, the majority of lawyers in this country raised the serious difficulties that are implicit in the ambiguous and complex wording in this amendment. Yes, the people went out and voted yesterday and we counted the votes today but what we’re faced with now is a legal section in the constitution and all I can do conscientiously and fairly and honestly as a lawyer is try to assess the implications of it. It is very ambiguous. Even the concept of the word unborn is not known to lawyers therefore, it must be determined. The effect on contraception in this country is I think, worrying a lot of people and I can understand that worry.”

Bowman: “Do you think there might be test cases on that?”

Mary Robinson: “I think that if certain types of contraceptive devices which are available at the moment are…the IUD, em…ah..em..certain types of pill are no longer legally available in the country and there’s some doubt and I think serious doubt about the IUD even under its present status. If that is affected and it certainly could potentially be by the wording of this amendment and either civil action is taken or criminal prosecution is brought then of course it will be tested before the courts. The courts in this country.”

Bowman: “John Kelly said it would be absurd for the Supreme Court to think it could have any difficulty in constructing that.”

Robinson: “Well the first problem the Supreme Court could be faced with is em.. is the problem of defining when the life of the unborn begins. Is it at the time of fertilisation? If that is so, do certain types of certain contraceptives, the IUD for example prevent implantation that would be now regarded as an interference with what we know as a constitutional right to life of the fertilized ovum….”

Robinson: “That would have very substantial implications.”

Binchy: “I think we get put the discussion into perspective. The amendment that was passed substantially by the people today was an amendment to protect the unborn against abortion. The amendment does this…”

Robinson: “That is only your construction…”

Binchy: “Sorry, Mary. Hold on one second. The amendment does this and the amendment ensures for instance, that our law will be protected against the possibility of a strong pressure being brought in this country as a result of a European decision which would be pro-abortion. I must say in this context that Mary has objected to the amendment precisely on the ground that we would be bad Europeans in failing to comply with a European decision from the European court in favour of abortion. I would say in this particular context that the issue of the human rights of the unborn against abortion is of such a nature that we should make up our own mind on this matter and not particularly worry in this context whether a European court would favour liberal abortion or not.”

Bowman: “After the debate on the referendum and so on, another of the issues which you go into great detail, theoretically admittedly in this chapter in this particular book is whether for instance women who now leave the country at the rate of ten a day should be prosecuted for having abortions abroad? You theoretically examine that in great, great detail…”

Binchy: “This is true, John. Of course, I examine it in the context of the previous existing law prior to the passing of the amendment. I should say in this context, you mention Professor John Kelly, the foremost constitutional lawyer in this country and used perhaps an indelicate expression to describe that particular kind of argument which I actually said on last Saturday’s radio programme was to assert to the Supreme Court in those circumstances would grant an injunction against a woman going to England was to assert that the Supreme Court was composed of imbeciles.”