The ESB is to decommission the Derrybrien Wind Farm in south county Galway.

The decision follows more than two decades of controversy over the planning process for the 70-turbine site on the Slieve Aughty mountains.

Last month, An Bord Pleanála has refused the ESB’s application for substitute consent for the development.

The ESB had sought retrospective compliance with an EU directive, but the planning board ruled that the damage caused by the wind farm was “clear, profound and unacceptable” and could not be fully mitigated.

In 2003, a boggy hilltop near Derrybrien in south Galway was clear-felled of 200 hectares of forestry and peat extracted from it up to a depth of 5.5 meters. 17 kilometers of roads were laid and 71 turbine bases constructed as the foundations for a wind-farm built and owned by Hibernian Wind Power, a subsidiary of the ESB.

On 16 October, 2003, a massive landslide sent 450,000 cubic meters of peat down the hillside, polluting the Owendalulleegh River, resulting in the death of around 50,000 fish and lasting damage to the fish spawning beds. No environmental impact assessment had been conducted before the establishment of the wind-farm.

On 3 July, 2008, The European Court of Justice (the ECJ) ruled that an environmental impact assessment should be carried out, not merely as proper practice but as a legal obligation. In its pleadings before the Court, the European Commission pointed out and the Irish Government accepted that the landslide was linked to the construction work at the wind farm. The Government committed to comply with this ruling.

A decade passed during which three things happened.

First, plenty of helpful reminders from Europe to Ireland of the need to get on with it.

Second, a certain amount of leisurely paper shuffling and buck passing in Dublin between the “Department”, the ESB and its subsidiary, but no action.

Third, growing awareness among south Galway residents that the negative environmental impact of the wind-farm was not confined to the once-off landslide. The clearance of the hill top to facilitate the wind-farm and the 30 kilometers of deep drains dug into the mountain to keep the site dry has exacerbated the endemic flooding of their area by causing water to flow down the hill faster than before.

This is a coronavirus-free zone, almost (Daire O’Criodain, Medium)

Inis Oírr in the background. Both islands later got EU-funded harbours that largely ended the working currach. My elderly mother had been reluctant to return to Inis Oírr for the millennium celebration because she feared that currach trip ~ highly delighted with the harbour!

IL Vicolo has raised almost 70k to fight the vaccine pass system in the courts.

The Italian restaurant has refused to ask for digital certs and has been inspected on several occasions by the HSE as a result.

‘We were served with a Compliance Notice on 20th August and brought to the District Court on numerous occasions. Our business was even shut for two days in September following an application by the HSE for an emergency cessation order. On 4th October the District Judge ruled that he did not have to address the issue of discrimination as the Compliance Notice issued by the HSE was worded in a way that meant that we did not have to prevent people from entering’

Oisin Collins, senior counsel for the restaurant, submitted in court that the EU Digital Covid Certificate regulation provided for a third category of testing. This omission was a clear breach of the regulation itself, European privacy law, the Constitution, the European Charter of Fundamental Rights and the EU Convention on Human Rights, he submitted, adding that his position on the issue of discrimination was unanswerable.

Stephen Moran, BL for the HSE, said the Irish Government were effectively “at large” in relation to how they wished to deal with the issue of re-opening pubs and restaurants at a domestic level, given the serious threat to public health and the rise in cases due to the Delta variant.

District Judge, John King, having heard detailed submissions on discrimination, decided that he did not have to rule on this issue as the compliance notice only went so far as to require records rather than prohibit people from entering.

“This is only the start of the push back against discriminatory laws. We received a letter from the HSE on October 14th that they intend to start inspecting our restaurant again as there has been further complaints of non-compliance,” the restaurant said.

“We intend to now challenge this discriminatory law to the Higher Court.” 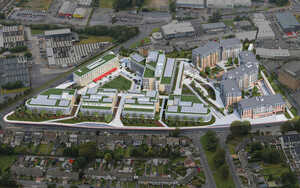 Via The Connaught Tribune:

The green light has been given for the construction of 345 apartments at the Crown Square site in Mervue – the majority of which will be put on the rental market and operated by a ‘cuckoo fund’ for a minimum of fifteen years.

Crown Square Developments, which is owned by developer Padraic Rhatigan, has secured permission from An Bord Pleanála for the ‘Build to Rent’ development, with four blocks ranging ranging from four to nine storeys in height.

There will be 240 two-bed apartments, 86 one-beds and 19 three-beds, all of which will be specifically for the rental market and not available to purchase. 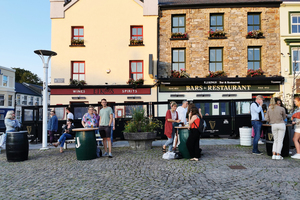 My colourised 1900c Robert French photo featuring the old Claddagh Bridge which linked the Fish Market and the Claddagh in #Galway City. The bridge was constructed in 1887 and replaced by the Wolfe Tone bridge in 1934.

Michael Torregrossa chose his moment to propose to Fererica Lombino in front of the famous Neactains Pub in the city’s Latin Quarter. After eating Connemara Oysters from The Galway Oyster House, Mr. Terregrossa slipped away and then on the pretex of asking Ms. Lombino to listen to a street musician dropped to his knee and produced a Claddagh Ring and proposed.
Ms. Lombino accepted to the loud applause of thrilled onlookers…

To help the disabled get that prized middle seat?

Or deter the homeless from having a kip?

I’m a wheelchair user and I really don’t get this. Like, we have somewhere to sit…we can sit beside benches or in front facing those sitting ob them. Looks like hostile architecture to me.

No arrests made in Salthill as images and videos emerge of crowds breaching Covid-19 guidelines (Independent,ie)

In a statement to Extra.ie, Gardai said

‘Gardai attended the scene of a gathering of people that occurred in the Galway city area at approximately 10pm.

‘The crowd was dispersed without incident and Gardai advised people present of the relevant health guidelines in place.

‘Gardai are not investigating breaches of Public Health Regulations by those in attendance.

‘An Garda Siochana has no statutory powers under “COVID Regulations” to prevent these gatherings taking place.’

Watch: Fury in Galway as large crowds of students congregate around the city (Extra.ie)