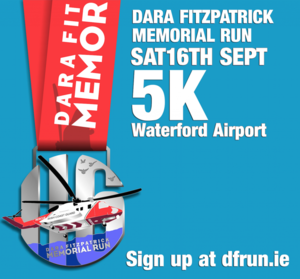 Proceeds from the run will go to the children’s charity Touching Hearts and South Eastern Mountain Rescue Association.

The Dara Fitzpatrick Memorial Run has released details of their run finisher’s medal. The medal depicts a Sikorsky S92 Helicopter flying over the sea on a rescue mission. In the background are the numbers “116”, together with four flying doves honouring the lost Rescue 116 crew members.

…Speaking about the medal one of the event’s organisers Captain Barry O’Connor said, “The doves are a touching tribute to our four colleagues who tragically lost their lives in the service of others on March 14th this year”

[Dara’s sister] Niamh Fitzpatrick said: “This medal is a beautiful memento of what will be an emotional run in memory of Dara. To have a design that captures the helicopter and the four crew members is very special; this is a medal that Dara would be proud of.”

Those wishing to take part can register here.