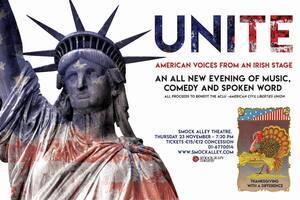 And many, many anti-Trump gags.

MORE than 20 American performers, artists and speakers will gather in Dublin for Thanksgiving to oppose Donald Trump’s agenda and raise money for one of his most determined opponents – the American Civil Liberties Union (ACLU).

The line-up for the November 23rd show at Smock Alley ranges from poets to circus entertainers and includes lots of music and comedy.