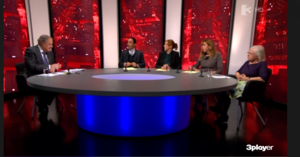 The panel on last night’s Tonight with Vincent Browne

The panel discussed the war in Syria; the 9 million Syrians who have been displaced – around 5 million within Syria and 4 million who have fled the country; and how, last year, 1.3 million people seeking refuge, not just from Syria, came to Europe, which has a population of 500 million.

A clip from Ms Butterly’s award-winning documentary, The Border, was shown in which two teachers from Aleppo spoke to her from a makeshift refugee camp in Idomeni, on the border of Greece and the Former Yugoslav Republic of Macedonia, at the beginning of this year.

While introducing it, Ms Butterly said:

“Although this clip focuses on these two Syrian women, these two survivors, I think it’s important also to widen the frame, in terms of migration, out past Syria and not just to exceptionalise the Syrian experience because, horrific as it is, there are people seeking refuge from Congo, from Eritrea, from Afghanistan, from Mali, from multiple other contexts. And conflict is only one one frame with which to view this. There’s also, as you know, climate change and resource grabbing and sectarian persecution, etc. So I think to have a more nuanced understanding of, you know, the determinants of forced migration and to recognise that this is a new reality that the EU has to deal with in a less myopic way and a more human way.”

After the clip, Mr Browne asked Ms Ni Chonaill if, on a humanitarian level, Europe should welcome more refugees – given that countries such as Lebanon, Jordan, Turkey have taken the greatest numbers of Syrian refugees and, more importantly, given that Europe had a part of play in the political unrest in some of the countries from which people are fleeing.

During her response, Ms Ni Chonaill said people who left Syria and entered Lebanon, Jordan and Turkey had “already fled the bombs and bullets” and were only moving on for economic reasons.

She said: “Europe has had enough of this.”

From the discussion following this…

Caoimhe Butterly: “I’d just like to respond. I mean, I think for a lot of us who are engaged in refugee solidarity and migrant justice work, or work with the undocumented and with asylum seekers in direct provision, living through the unjust direct provision in Ireland, the xenophobic discourse we’ve just heard, is nothing new to us. I have to say, at this stage, I think we’re all quite used to it, I think to the inhumanity of it, to the complete lack of empathy of it, to the other-ing, and to the selfishness of it ultimately. I think of an approach which prioritises, you know, really excluding those who have every right to seek refuge and lives of dignity in our homes. But, while listening to that, I’m just, I’m back from Calais a couple of days and all I could think of are the families, the women, the men and the children there, of such deep dignity and integrity and bravery, you know, who have risked so much to build lives of safety and I think it’s just a profound shame that this discourse is, you know, given time, that it’s given space…”

Aine Ni Chonaill: “Just listen to that now. What a democracy we live in…”

Butterly: “It’s not about censoring..”

Ni Chonaill: “Those who oppose you must not be heard?”

Butterly: “It’s not about silencing, it’s about widening that window of empathy and actually looking at the consequences of…”

Butterly: “…of responsibility. No, I think a discussion in which the lives of people who are condemned to death by these policies, at sea and in the backs of airless refrigerated trucks will be continued to be condemned to death by that lack of empathy. I just find it deeply sad and I really wish that those who hold these opinions could go and see, and interact, with these people and listen to their stories.”

Ni Chonaill: “I, particularly since Caoimhe has mentioned Calais, the people in Calais are in a safe country, France, but they have the brazen unadulterated cheek to say, ‘oh that won’t do, it’s got to be Britain. Nowhere else will do us. We’re going to Britain.”

Butterly: “They have families, they come from post-colonial contexts in which they speak English.”

Ni Chonaill: “Oh how, they speak English. ‘Oh I’m not going to go to the trouble to speak French. I’m going to Britain.’ They are in safe country and they have the brazen cheek, backed up by idiots like yourself, to say it’s got to be Britain.”

Maria Hennessy: “They actually have legal rights that aren’t being respected, under the Dublin Regulation, in order to be able to arrive in the UK because they have family members.”

Ni Chonaill: “And they only have to go through the asylum process in France and I’m quite sure that they can communicate with Britain..

Hennessy: “…which happens before you’re through an asylum procedure. Well you’re incorrectly quoting it there when you talk about it because…”

Ni Chonaill: “Well I’ll stick to what I’m correct about. They have a brazen cheek to say ‘I’m in France but France won’t do’.”

Ni Chonaill: “I consider Britain a decent country and I’m happy for them to do their regulations.”

Ni Chonaill: “No, and on and on and on with your list. And, as Caoimhe said, it was very interesting to listen to her, we must not exceptionalise Syria, neither must we, we must think of all these others ones, including the climate change and she seemed to imply the economic difficulties as well. It is neverending. And the rights you talk about…”

Ni Chonaill: “This right to asylum. Well, really, it’s too much to go into this evening but the Geneva Convention that was set up in 1951 said, and these people know that, it said this applied, I’m putting lay language into it, this applied to, it was a mopping up operation, after world war two, this applied to people displaced after world war two. It applied to nobody else and no other circumstance and in 1967 with the New York protocol, because of the Cold War, and having no idea what was coming down the line in the future, they stupidly expanded it and both of, they never, ever, ever would have signed it, the countries of the west, if they knew what it would mean.”

Ni Chonaill: “And there’s an opt-out clause in both of them.”

Hennessy: “I just hope you never have to flee conflict..”

Butterly: “I was just thinking the same thing..”

Hennessy: “I really, really hope that you never do because it’s such an inhumane response. I just can’t believe it. It’s truly shocking.”

Ni Chonaill: “Never mind the playing the man, not the ball, stick to the policies..”

Browne: “You’ve been playing the man, you called them stupid a few minutes ago.”

Ni Chonaill: “Which my organisation opposed precisely for this reason…”

Hennessy: “So we have opted into that Common European Asylum System, it is grounded in international human rights..”

Ni Chonaill: “We have done all these foolish things, yes..”

Hennessy: “…in many ways, but not in all ways. And you just really need to look at the right to asylum being really being guaranteed in practice as well as in law. And I just really hope that you never are in the situation where you have to flee your home.”

Ni Chonaill: “The Geneva Convention should have never been interfered with. It should have been what it said, purely as a mopping up operation after world war two. And both of those things, the convention and the New York protocol have an opt-out clause. Of course the EU would be a different kettle of fish but any country that signed up, as we did in, I think it was [19]54 whatever, every country can give a 12 months’ notice and withdraw from it and if we’d any cop on, that’s what all the countries of the west would be doing.”

Butterly: “Who is we? What constituency do you represent? I mean, really, who is we? Because I would say that there is a deep core of empathy and humanity and compassion in Ireland and I’ve seen that on so many expressions, from the grassroots up and I really hope that, that you can bear witness to some of that, whether it’s on the ground in camps or face to face with people who are prioritising empathy. We can go into policy but I think the core of this is having the basic humanity and decency to see people in times of need and to do the right thing by them.”

Ni Chonaill: “There will be no end to times of need. Iraq, Afghanistan, Syria, Eritrea. And on and on and on.” 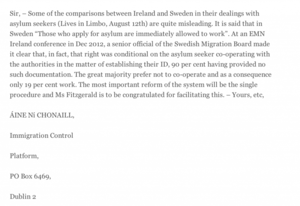 Previously: ‘Economic Self-Interest May Do The Job’

Ms Ní Chonaill launched the Immigration Control Platform in Ennis, Co. Clare in January, 1998. A few months prior to that, the West Cork teacher stood in the June 1997 general election on an anti-immigration ticket, gaining 293 votes in Cork South-West.

She also ran for Dublin South Central in the 2002 election, above, where she gained 926 votes.

Ms Ní Chonaill featured on show as a follow-up to yesterday’s programme, during which an asylum seeker from Syria, called Ali, talked to Joe about the six years he lived in an accommodation centre in Dublin.

Áine Ní Chonaill: “Anyone who abuses the asylum system, just as a way to get to the West, and it is massively abused, is an invader of our country.”

Ní Chonaill: “Anyone who barges their way into your country, against your will…”

Duffy: “Now it’s not my, your country. I mean who’s country is it?”

Ní Chonaill: “This is the country of Irish people. Do you think I’m making some exception of myself…”

Ní Chonaill: “I beg your pardon?”

Duffy: “We don’t own the country, when you say ‘your country’.”

Ní Chonaill: “We most certainly do own our country. If you think we don’t own our own country, Joe, you’ve got a very big problem.”

Duffy: “Maybe I have. They’re invaders?”

Ní Chonaill: “Anyone who is an illegal immigrant, ‘i’ ‘double l’, illegal, or I add on an asylum abuser is such a person.”

Duffy: “OK. What is the purpose of this invasion?”

Ní Chonaill: “To get to live in the West.”

Duffy: “Yeah, and do they want to rob anything off you or me or pillage or rape or…”

Ní Chonaill: “Well, excuse me, they want to rob from…”

Duffy: “Because invaders usually come because they want to rob, pillage, rape, overthrow…”

Ní Chonaill: “I beg…If you want to use that kind of language, go right ahead.”

Duffy: “But what do invaders do?”

Ní Chonaill: “Invaders are people who say, effectively, I’m coming into your country whether you like it or not.”

Ní Chonaill: “In our country.”

Ní Chonaill: “In our country which is our communal home. Are you trying to say that the country doesn’t have the right to say who comes into the country?”

Ní Chonaill: “Well, obviously, I don’t know any circumstances, what I do know…”

Duffy: “Because he wanted to get out of Syria.”