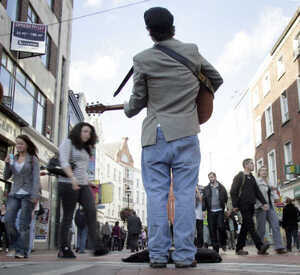 First they wanted their drums, swords and flames.

Now they want their amps.

A total ban on the use of amplifiers by buskers has been recommended by Dublin City Council management as part of a revision of by-laws.

A report to councillors says the decibel limits introduced in by-laws over a year ago have only been partially effective and “extremely difficult to enforce”.

Assistant Chief Executive Brendan Kenny states in the report that complaints are increasing and 83% of the 238 public submissions received on revisions to the by-laws complained about noise levels.

Council management are now proposing to ban amplifiers and the use of the backing tracks for all buskers in the city.

No Drums, No Swords, No Flames