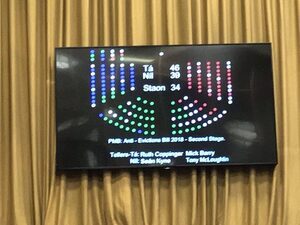 The government has been defeated as an anti-eviction bill sponsored by People Before Profit preventing landlords from evicting people into homelessness has passed 46-39 and will now go to the committee stage.

Fine Gael voted against the bill while Fianna Fáil abstained.

The Solidarity-People Before Profit bill would:

– Abolish the sale of a property as a ground for ending a tenancy.

– Require landlords terminating a tenancy to allow for a family member live in the property instead to pay six months’ rent to the tenant.

– Abolish ‘refurbishment’ or ‘renovation’ as grounds for terminating a tenancy.

Last year the bill didn’t pass after the Dáil vote was 51-51 and Ceann Comhairle Fianna Fáil’s Seán Ó Fearghaíl used his casting vote to vote against it.

#BanEvictions 13 Dec 2018 – here are the TDs who voted NO to banning evictions. pic.twitter.com/7uoIAwtjje