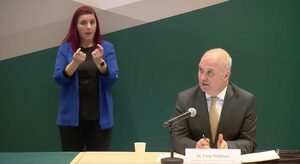 Dr Tony Holohan says that regardless of changes to testing criteria, the ‘key measures’ for people who show Covid-19 symptoms is to stay home and self-isolate for 14 days | Read more: https://t.co/dMKrOzQloD pic.twitter.com/KyO1rrU3Ez

At the Department of Health’s Covid-19 press briefing, chief medical officer Tony Holohan was asked a question about antibody testing.

It followed UK MPs being told earlier today that the British public will be able to carry out Covid-19 antibody tests at home within a matter of days via finger prick tests made available from Amazon and Boots.

George Lee: “In the UK, yesterday, they made a big point of the fact that they’d ordered three million kits for testing people for antibodies, to encourage, so they know when people can go back to work. Do we have any idea or any notions along the same lines because there are a lot of people who would probably like to go back to work, wouldn’t like to be off for many weeks, would like to know if they had antibodies.

“There are a lot of people who aren’t being tested who may, kind of, have already had this disease. As they said in the North, they figure there’s thousands rather  hundreds.

“So have you any plans to start to order, like they have in the UK, a significant number of antibody tests, as part of the overall strategy?”

Tony Holohan: “So we want to be in a situation where we have a reliable serological test that we can use for a variety of purposes, including the purpose that you’ve identified.

“We’re not at a point yet, where we’ve identified a test that we think can be used in this country in the way that you’re describing…”

Lee: “So you would not be satisfied with the UK…what they’re buying…”

Holohan: “I’m not going to criticise the UK, I’m simply going to say that we haven’t been satisfied yet that that’s a step that we’re ready to take. There have been significant differences in policy here around testing of our population, around public health recommendations as between here and the UK.

“We think we’re following the right strategy now in terms of focusing our testing on identifying confirmed cases of this illness and instituting control measures and contact tracing measures in the population. Those are measures that are not currently part of the strategy in the UK and they’ve moved to a different testing regime in terms of serological testing, [inaudible] patient testing kits.

“We don’t think we’re ready for that step at this point. We want to focus our efforts on the public health containment measures that we now have in place in the population.” 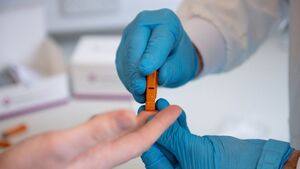 The public will be able to conduct coronavirus antibody tests at home within a matter of days with finger prick kits that will be available from Amazon and Boots, UK MPs have heard

Professor Sharon Peacock, director of the National Infection Service, Public Health England (PHE) told the Science and Technology Committee that 3.5 million tests had been bought and would be available in the “near future”.

She said the tests would also allow key workers – like doctors and nurses – to go back to work if they have developed antibodies.

Prof Peacock explained a small number of tests would be tested in a laboratory before being distributed via Amazon and in places like Boots.

Serological testing – the test that looks for antibodies in your blood – was briefly mentioned on RTÉ’s Today with Seán O’Rourke  during an interview with Dr Liam Glynn, Professor of General Practice, Graduate Entry Medical School, at the University of Limerick, following a question from a listener.

Mr O’Rourke and Dr Glynn had this exchange.

Seán O’Rourke: “I’m wondering if you might be able to take some of the questions coming from our listeners on the fly, as it were. A question for the doctor: how long does the virus stay in the system?

“Will it be still traceable by swab after a few weeks after the infection?”

Dr Liam Glynn: “No not by swab, there’s a thing called serological testing where a blood sample is taken to check that you have developed antibodies for the virus.

“And this is actually an important part of the public health approach in some countries because what you’re trying to do is you’re trying to identify then people who have developed immunity to the virus and now can, for example, in the case of a healthcare worker, for example, can go back to work or in the case of someone who is providing an essential service can also go back to work.

“So serological testing may be something that might be important in the weeks ahead.”