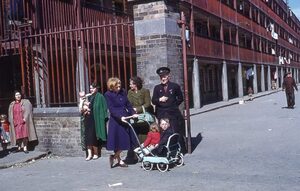 “I interviewed Dave, the man in the photo walking inside Corporation Buildings.

In the late 1930s at the age of 12 he got summoned to court and sentenced to two and a half years in Artane Industrial School, his brother John got 7 years. They couldn’t attend school, they had the scabies.

His story would make a great movie, events in Artane Industrial School and what happens when he comes home, to find his mother died. He ends up in India in the British Army, refused to shoot people rioting, went to prison.

Back home, his father is a broken man, he’s taking to drink, his wife is dead, his family is destroyed. Events get worse, he turns Dave away from the door.

Dave is walking the streets broken-hearted over John, the brother he left behind, asking round the neighbourhood did anyone see him. He was told he was sleeping on the streets. Dave knew not to look for him until nighttime.

After spending many nights going in and out of tenements with a candle calling out his brother’s name, he met a friend who said to him:

“I hear you’re looking for John, did nobody tell you, John died and is buried in a pauper’s grave.”

Dave was in shock. His friend offered to put him up in his house, knowing he had money from the Army. 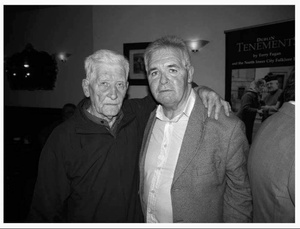 After spending all his money with him, his friend told him “sorry, you have to leave, the wife is giving out.”

Then one rainy night Dave made his way to the tenements on Sean McDermott Street [Dublin 1] and bedded down alongside other down and outs.

Morning time came, he was getting up, he tipped the man beside him to move and when the man turned around, it was his brother John. The pal who had told him otherwise was getting into him for his money.

All Dave had left from his army days was a watch. He took John to the pawn office and pawned it and gave him the money to buy a boat ticket to England.

Dave, John and his sister met with me in the Folklore Office and told me what happened to them, how their lives  have changed. It does not end there.”

One of things he told me when he was sent to prison for disobeying orders, "The prison in India was like a hotel compared to Artane Industrial School" For years he walked out to the former Industrial School. Ask why, "to remind me, les I forget the hell I was in". Rip Dave.