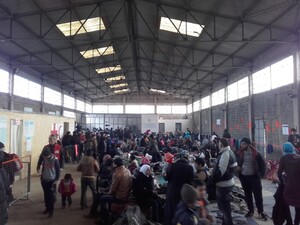 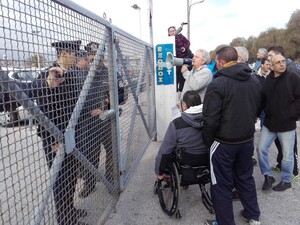 Broadsheet’s Olga Cronin recently returned to Greece to join the volunteer effort to help refugees arriving on the island of Chios.

Last Wednesday morning, Greece’s Prime Minister Alexis Tspiras visited the island of Chios where, according to the UNHCR, some 112,877 refugees arrived between January and December 20 of this year.

After touching down at Chios airport, via helicopter, Mr Tspiras avoided a small group of protesters who had gathered at the airport’s front gate, by exiting a side entrance.

Among the group of protesters were father and son Mimis and Dimitris Lavatsis who said they fear refugees will be deported from Greece unfairly.

“[Tspiras] wants to send many of these people back to their countries. In some of these countries, there are wars,” said Mimis.

The protest followed the removal of 120 Moroccans – who had been forcibly removed from the Greece/Macedonia border – from Taekwondo Stadium in Athens to a detention centre in Corinth, west of Athens, amid reports of clashes at the stadium.

The Lavatsis’ fears of blanket deportations based on nationality don’t appear to be completely unfounded considering this morning’s claims from volunteers based in Chios – following discussions with officials present – that Moroccans brought to Chios’ registration centre, Tabakika, are to be arrested.

In scenes reminiscent of Idomeni a few weeks ago – in which those who weren’t from Syria, Afghanistan or Iraq were refused entry to Macedonia – the authorities at Camp Moria in Lesbos have stopped registering asylum seekers from Morocco, Tunisia and Algeria – prompting some of these people to go on hunger strike at Moria yesterday.

It’s unclear what will happen these people stranded at Moria and Tabakika. Not being able to register means they cannot travel to Athens.

Tabakika is a draughty, cement-floored former factory. There is no heat provided in the area where refugees wait, very little light at night and the electricity cuts out regularly.

A bitterly cold wind blew through its doors and broken windows each night last week with temperatures hovering around five or six degrees celsius.

Refugees who do sleep there ask those working there for cardboard boxes to sit on while, at around 11pm, UNHCR blankets are usually distributed by volunteers and the NRC.

As soon as those distributing appear with the blankets, crowds of refugees surround them begging for one. The protocol is to tell the refugees to sit down and inform them that the volunteers or NRC staff will come and give them a blanket.

Priority is given to babies, children and women. Men often have to go without.

Officials working at Tabakika say, on a normal day, 50 refugees would be registered in an hour but, on the morning of Tspiras’s visit, it took almost five hours to process the same number of people.

One official at the centre said there were ‘system problems’.

These ‘system problems’ could have something to do last week’s withdrawal of the EU’s border agency Frontex – which is providing additional technical assistance to the Greek authorities registering refugees – at Tabakika.

The suspension of their services is due to fears the building, in which it helps with interpretation, identification, finger-printing and the screening of refugees, contains asbestos.

Frontex, which has 32 officers deployed in Tabakika, first raised its concerns about asbestos with the Greek authorities at the beginning of December and claims it has been engaged in daily discussions requesting asbestos tests since then – to no avail.

The Norwegian Refugee Council, which is assisting the Greek authorities and works with volunteers at Tabakika, says it has been aware of concerns regarding asbestos since the centre opened in November.

As of last Thursday night, refugees who were waiting at Tabakika to register and several independent volunteers – who don’t work for any organisation per se – were not officially informed of the asbestos fears or the withdrawal of Frontex.

Just last week a group of independent volunteers started providing hot soup and tea outside the centre, because only water and crackers are sometimes provided.

A local solidarity group also often arrives to provide food to those waiting to register.

Tabakika is not an official accommodation centre. However, refugees waiting to register do sleep there – sometimes for several nights.

“[Frontex] has raised its concerns with the local authority because they have noticed, by looking at the roof, that this might be asbestos. There is no proof. We have raised this on a local level with local authorities, we have asked them to make an assessment, a technical assessment of the presence of asbestos and we have been in daily contact. All the people working there are equally affected because these are people that spend many, many hours every day, presumably for months. So as these discussions are going on, we have been raising this with the national authorities.”

“At the beginning of December, our offices raised the question of the asbestos in the roof. But the migrants do not sleep there, this is just a registration centre. This is not an accommodation centre, this is not a camp. It is the officers who are there all the time. They spend days and months there. The registration process would only take a few hours. There is no doubt that the situation is very dangerous but this is not a place where people sleep. There is only a roof and there are no doors.

“We don’t have the capacity to make an assessment. We have requested an assessment to the Greek authorities. [An assessment] can only be done by the national authorities. What is needed is some kind of technical survey of the building that proves this building is safe for use.”

“We want to continue our work, we stand ready to resume registration activities the moment we are provided adequate facilities or confirmation the facilities are not contaminated. Everybody [other agencies working in Tabikika] are as concerned as we are.”

“These things can happen but adequate facilities have to be provided that are safe for those working there.”

“The Greek authorities continue their work. The emigration procedures are done by the national authorities, it’s just we cannot do this until we find an alternative solution.”

When pressed on the matter of refugees sleeping at Tabakika, the spokeswoman said:

“I am not aware of the migrants sleeping in Tabakika for several days. It is possible that those migrants who arrived via sea at night may have to wait longer, but they are always processed within one day.”

“The time migrants and refugees spend in the centre while awaiting registration, varies depending on the timing and the overall number of arrivals – sometimes you may have several hundreds, even thousands people arriving in one day, other days are calmer.”

A spokeswoman for the Norwegian Refugee Council – which has paid staff present at the centre – said:

“The international organisations present and the authorities were aware of the asbestos in the roof from the beginning (it opened in November). We were informed by the Greek authorities about this.

“The Greek authorities are running the centre, and NRC is supporting with humanitarian assistance to the refugees while they are waiting in line for registration.”

“We are aware that there is asbestos in the roof. However, Greek authorities have decided to use this building for registration purposes, in response to the humanitarian crisis. The registration process is led by the Greek police, and it is up to the authorities to decide whether they will continue to use this facility.”

“All our staff have been informed about the asbestos. We have had a security adviser visiting the site, and we are currently in touch with a company which will help us assess the asbestos level and any potential risks to staff and beneficiaries.”

The spokeswoman said none of NRC’s staff have decided to stop working at Tabakika in light of the concerns raised.

A spokeswoman for the UNHCR said:

“UNHCR is informed about the situation highlighted by Frontex. The Agency takes very seriously those concerns, since the well-being of its staff and the refugees is its number one priority. UNHCR’s Health Unit is examining ways to deal with the issue, while thorough tests are urgently needed to determine the situation. Meanwhile, our staff is taking precautionary measures, like the use of masks, and the Office is advocating with the government for the identification of an alternative facility.”

Requests for a comment from the Greek authorities, via the General Secreteriat of Information, have gone unanswered.

In relation to the delays in registration and reports that Moroccans and people of certain nationalities are not being registered but instead face being detained, the UNHCR spokeswoman said:

“UNHCR has observed delays in the registration of new arrivals, including with respect to the specific nationalities from Morocco, Algeria and Tunisia, and has raised its concerns to the competent authorities. Our standard position is the prompt registration of all newly arriving persons on the basis of equal treatment. Vulnerable cases need to prioritized. For any further details regarding registration procedures on the islands, please contact the Greek authorities that are in charge of the registration process.”

“Detention should be a measure of last resort, prescribed by national laws and implemented only when necessary and proportionate to a legitimate purpose in conformity with international standards. Persons with specific needs (e.g. unaccompanied children, persons with serious health problems, torture survivors) should be exempted from the application of the measure of detention.”

“UNHCR promotes alternatives to detention for all persons of its concern. In addition, UNHCR highlights the need for provision of information to third-country nationals placed in administrative detention, about their rights and obligations in a language they comprehend, including about their right to seek asylum, in line with the principle of equal treatment and other procedural guarantees. It is reminded that international law prohibits detention or restrictions on the movement of a person on the basis of race, colour, sex, language, religion, political or other opinion, national or social origin, property, birth or other status.” 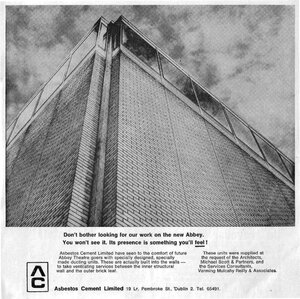 It’s something you feel.

An Asbestos Cement ad in the programme for Lous MacNeice’s ‘One Foot in The Grave’ at the then newly-built Abbey Theatre, Dublin, October 1966.