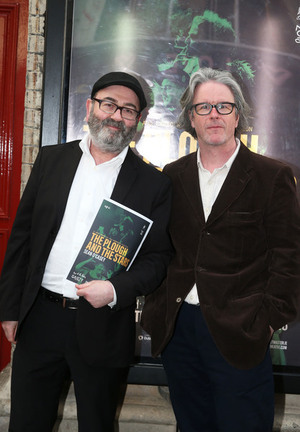 ‘It is with regret that we, the undersigned theatre practitioners, write to apprise you of our deep concern and dissatisfaction with the direction that the Abbey Theatre has taken since the appointment of its directors, Neil Murray and Graham McLaren.

The grace period since their arrival is well and truly over and the situation in which the Irish theatre community finds itself is now critical. While the institution may be financially buoyant – and due congratulations for this – the freelance theatre community, in particular, has been cast adrift.‘

Part of a letter signed by 300 actors, directors, designers, agents and playwrights to Minister for Culture Josepha Madigan yesterday

“The Abbey Theatre is artist-led and audience-focused: we aim to ensure our programmes are driven by ambitious, big ideas by theatre-makers of all disciplines, relevant to our times and reflective of our role as a national theatre. In this approach to theatre making, we are following patterns found in many countries with strong traditions in the theatre and we are seeking to address with urgency some of the key social, cultural and political issues of our time.”

The Abbey Theatre in response 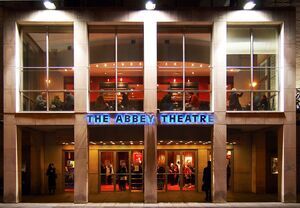 The North American musical Come From Away, currently on the Abbey stage, is another attractive show to be seen over the Christmas period.

The puzzle is why a production created outside Ireland and on its way to London’s West End is playing for seven weeks at the Irish National Theatre.

The Abbey receives by far the greatest share of the Arts Council theatre budget, and the assumption must be that this subvention is an investment in the vast creative talent within the Irish theatre community.

Is it appropriate that there should be no representation of Irish-based writers, directors, actors and designers on the main Abbey stage for two months of the year for which it receives generous public funding?

Some 140 Abbey staff are listed in the Come From Away programme and they are among the most experienced and committed practitioners of theatre in Ireland.

Many freelancers on the Irish theatre scene are available for their expertise also to be engaged. Surely it is the responsibility of our National Theatre to draw on this well of home-based talent, recognised and envied outside our shores, to produce its own show for Christmas. 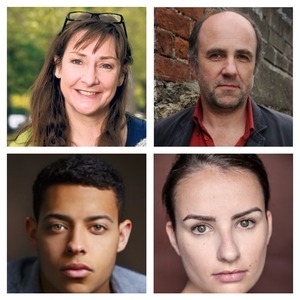 On the Peacock stage of the Abbey Theatre.

It’s the final night to catch the current run of A Whisper Anywhere Else by playwright Jimmy Murphy, as part of the Abbey Theatre’s What’s Happening Now series – a series of plays that aim to provide “an urgent response to an urgent issue”.

Based on public sources, statements, inquiry reports, media reports and Dáil records, A Whisper Anywhere Else meticulously traces the troubled history of An Garda Síochána, the controversies it has survived, disturbing allegations made by unnamed male and female gardaí and the organisation’s treatment of these whistleblowers.

A Q&A with Mr Murphy will take place after the performance.

Couldn’t be more timely, in fairness.

Tickets are €8 and can be bought here.

A Whisper Anywhere Else (Abbey Theatre) 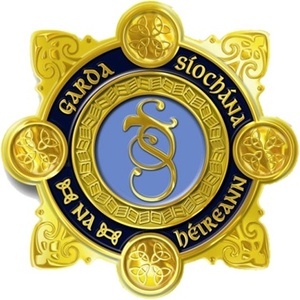 In the Peacock stage of the Abbey Theatre, at 8pm.

As part of the theatre’s What’s Happening Now series.

A play about Garda whistleblowers, called A Whisper Anywhere Else, by Jimmy Murphy. To wit:

Ireland is about to embark on another tribunal. The Disclosures Tribunal. Once again we are investigating Garda corruption and malpractice. It is our third tribunal in 40 years. But this one is different. Because this time, it’s members of the Gardaí who have made the complaints.

Through public sources and testimonies Jimmy Murphy examines the treatment of Garda whistleblowers and the dark underbelly of Irish society. From 4-6 May 2017, cast includes Lorcan Cranitch, Pauline McLynn and Sophie Jo Wasson.

Each performance will be followed by a discussion giving the opportunity for the audience to participate, ask questions and shape the development of the show.

Some staggering revelations in it. I presume everything that happened in it is true, for instance, Gardai keeping smuggled suitcases of cocaine for themselves and then having dealers sell it for them! 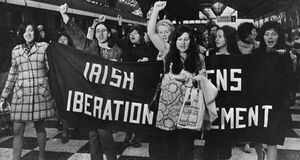 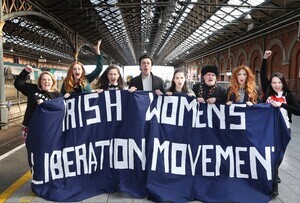 The cast of musical  The Train gather on the platform where the original Contraceptive Train left for Belfast in 1971 (top).

Rehearsals began at The Abbey Theatre this week for the Rough Magic production written by Bill Whelan and Arthur Riordan, celebrating the train’s famous journey.

The show runs at the Abbey Theatre from April 7-15, before opening in Belfast later this month. 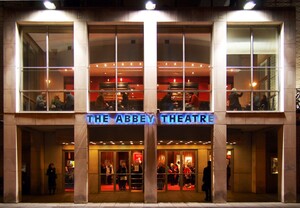 Would be grateful if you could highlight the conversation going on at #WakingTheFeminists on twitter. Huge response to the national theatre’s 2016 programme including only 1 woman playwright and 3 women directors out of 10 productions for next year.
Theatre may not be everyone’s cup of tea, but it’s a bigger conversation that that about gender equality in our society in general, not just across arts organisations. For a state-funded organisation whose mission includes representing the nation, the Abbey don’t have a great track record on identifying and dealing with its own gender-bias. 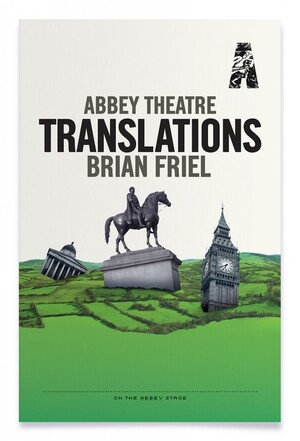 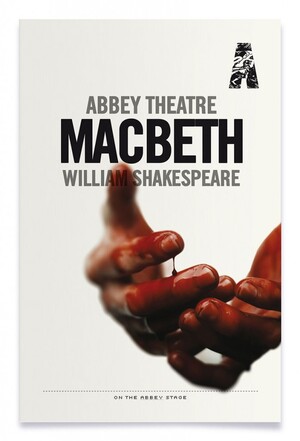 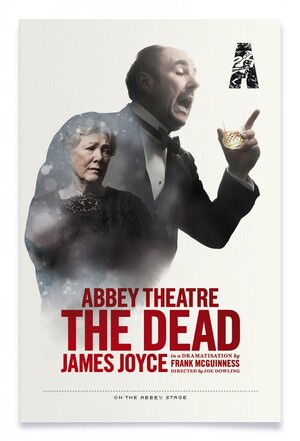 Distinctive designs for the Abbey Theatre.

“I’m a designer in Zero-G, a Dublin-based design studio that’s been producing posters for the Abbey theatre for over five years (you might have seen them around town now and again). We’ve finally gotten an archive up and running, and thought your readers might be interested in having a look :) 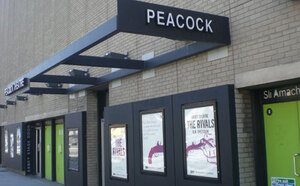 “And then there is the issue of the Peacock. How could it be part of any well-thought-out strategy or understanding of the responsibilities of the National Theatre to commit significant funding to it over a three-year period while tolerating the effective closure of what is, to all intents and purposes, the engine room of the Irish theatre?
The future of the Abbey comes through the Peacock. And if a National Theatre is not about the future, then it is increasingly forced to fall back on institutional rhetoric rather than excellence of performance, to justify its existence.
It also has to be asked: where does the chair and board of the Abbey stand on this? The Peacock going dark for such long periods of time is something that surely, as a strategic issue, had to have board approval?

Fixing the Abbey: where next for the National Theatre? (Garry Hynes, Irish Times)

Previously: Abbey On His Bonnet 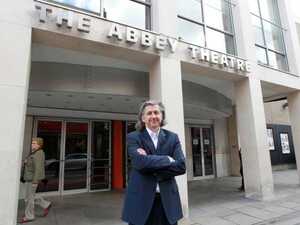 “Tonight we’ll perform The Risen People at Larkin Community College in Dublin City Centre to secondary school pupils and the local community. On Saturday we concluded our inaugural Theatre of Memory Symposium which saw the leading thinkers and doers in Ireland imagine how theatre and the arts can respond to the events of our past. However following the unprecedented publication by The Irish Times on Saturday 18 January of private evaluation reports about productions at the Abbey Theatre, there is another debate ongoing.

The cruel publication of these reports, without a clear context, and halfway through a private evaluation process has undermined the trust between the Abbey Theatre and the artists we invite to work with us.

The background to this event is as follows. An international evaluation panel was established as a pilot for the Abbey Theatre because I was concerned that people who had a possible conflict-of-interest with regard to the Abbey Theatre were assessing us. Also I felt as a national theatre we should be benchmarked against other theatres.

When I was alerted to the fact that The Irish Times were planning to report on this matter, I offered to meet the journalist in question to discuss the wider context. I felt strongly that The Irish Times should understand and acknowledge the bigger picture with regards to the process of evaluation between the Arts Council and the Abbey Theatre. The journalist didn’t agree to meet with me but it was suggested to me that I could write a piece in response to his article. I declined the offer because I disagreed with the publishing of this article. I am however concerned about the ramifications of this event.

Theatre is built on trust and collaboration. I believe artists should be able to create theatre and art in supportive and respectful conditions. The making public of private evaluation reports poses questions about how publicly funded arts organisations are evaluated in order to receive funding. I believe artistic sensitivities should be treated in the same manner as commercially sensitive information. Otherwise how can theatre be evaluated? How can artists at the Abbey Theatre and elsewhere go about their creative work with a degree of trust and the respect they deserve? Does this risk setting a precedent for the publication of every Arts Council evaluation report?

This is an extremely tough environment to make theatre in. The whole arts sector is working with diminished resources. It means I have to make tough decisions so that the investment in our art can be maximized to the best of our ability and that value for money for the Irish tax-payer can be achieved. I have no issue with evaluation. Every publicly funded organisation is evaluated and rightly so.

Saturday was a sad day for the arts in Ireland, a day when opinion was presented as fact. I’d like thank all the supporters of the Abbey Theatre, the artists we rely on, the audiences that we make our work for every night. I am proud of every play that we have staged at the Abbey Theatre. I am proud of every artist who chooses to collaborate with us to achieve theatre on a bigger, more ambitious scale than any other Irish theatre. I am proud of our dedicated staff. I am proud of our support of emerging writers, actors, designers, directors. I am proud that we are a mission led theatre – that our theatre is socially and civically conscious and that we hold up a mirror to Irish life as our founders intended.

The Abbey Theatre will not be left wanting when it comes to interrogating and reflecting Irish society at a time when we need our artists to help us make sense of our times. May this debate continue but with respect for the artist at the heart of it.” 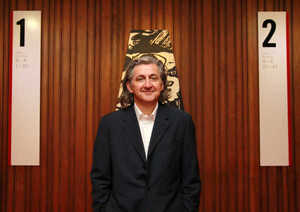 [Mr Mac Chongail] said [On RTE R1’s Arena] the documents had been released before the process was completed as he had not sat down with the panel to discuss and respond to their views.“It’s like delivering a half diagnosis,” he said. He said he “fundamentally disagreed” with all their assessments of the productions.

He said he had explained to Fintan O’Toole of The Irish Times, who wrote the article, that the process was only half way through because the theatre had not given a response to the assessments. “But that wasn’t heeded,” he said. “The Irish Times published knowing full well that the process wasn’t completed, and they should have made that comment.”

Speaking later in the programme, O’Toole said he had asked Mr Mac Conghail to comment on the assessors’ reports, but he had declined. The Irish Times had also offered to publish a piece written by Mr Mac Conghail, an offer which still stood, O’Toole said, but this was also declined.