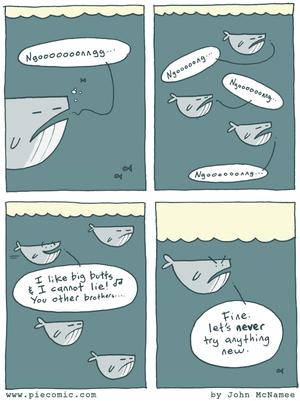 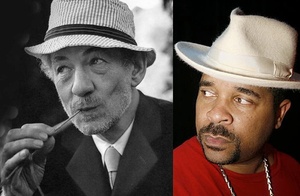 American actor Hunter Davis applies his impressive Ian McKellen impression to the lyrics of Sir Mixalot’s ‘Baby Got Back’.

The original Wikipedia synopsis of Baby Got Back by Sir Mixalot – long since removed ‘by Wikinazis’, but still alive and well in screen-grab and transcript form for teh lols.

The song opens with two young females discussing the physical appearance of a third female, in particular her buttocks, which they find unfathomably large.

In the opening verse, Sir Mix-a-Lot professes his affinity for large buttocks and his inability to disguise this fact from others. He goes on to describe other desirable physical attributes, such as a trim waistline, tight-fitting garments, and unblemished skin. Though the song does not contain a distinct narrative, the author does visit recurring themes, such as female body image as depicted in media, male attitudes toward dating and relationships, and the author’s own sexual prowess.

In later verses he expresses his exasperation with the entertainment industry’s portrayal of the ideal female form. He soundly rejects the notion promulgated by fashion magazines that diminutive buttocks are more desirable. His critique of the women who appeared in contemporary music videos is particularly scathing, likening their appearance to those of prostitutes. To further illustrate his point, he stipulates that the purported ideal proportions of 36-24-36 (measuring the bust, waist, and hip circumferences respectively) would only be pleasing on women with a standing height no greater than 63 inches.

Mix-a-Lot also briefly touches upon the roles that ethnicity, nutrition, and physical fitness play in determining the shape and size of the female buttocks. He recommends that any exercises performed should be limited to the abdominal area. He cautions against a fitness routine strenuous enough to diminish the heft of the gluteal muscles. Though he offers no broad dietary guidelines, Mix-a-Lot contends that the dish “red beans and rice” is an important food staple for maintaining healthy buttocks.

Various lyrics address the fact that some men find no intrinsic value in large buttocks and consequently express a lack of interest. Mix-a-Lot makes clear that he would eagerly strike up relations with any woman overlooked or discarded by such men. The remainder of the vignette is fleshed out by the author’s attempts to entice women into enjoying a ride in his luxury automobile.