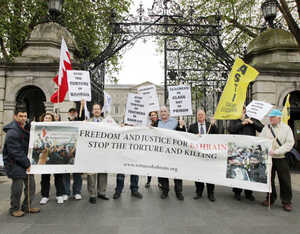 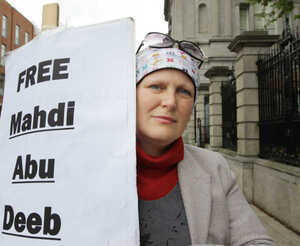 Protestors outside the Dail this afternoon (including Tara O Grady above) calling for the release of Mahdi Abu Deeb head of the teachers’ union in Bahrain and his assistant Jalila Al Salman who have been in prison since the attempted Bahraini uprising two years ago. Your link to the Anonymous attack on the F1 website this evening indicates you might have heard of Abdulhadi Al-Khawaja. He was mentioned by name in the Anonymous attack, which included a link to the website of Front Line Defenders. What you might not know is that Abdulhadi has a long connection with Ireland and until last year worked in Front Line, a truly fantastic human rights organisation that do sterling work from their office in Blackrock, Co Dublin.

In early 2011 he began to concentrate on the emerging pro-democracy protests in Bahrain. He spent his time monitoring and documenting human rights violations, publicising them in an effort to encourage the authorities to stop, advocating peacefully for democratic reforms and training others in Bahrain to do the same. He is not a member of a political party and encouraged other protesters to stop using violence, but for his activities he was arrested on April 2011, brutally tortured and sentenced to life in prison for what the government called terrorism. Abdulhadi has now been on hunger strike for 71 days, in protest at his detention and the detention of another estimated 600 political prisoners in Bahrain. To put this in perspective, Bobby Sands died after 66 days on hunger strike.

Everyone from Amnesty International to Catherine Ashton to Ban Ki Moon have called for his release or for a humanitarian solution to his situation. But as of this evening, as the Formula 1 weekend kicks off in Manama, Abdulhadi is near death and the authorities have refused to consider any compromise.

A commenter on your F1 post this evening already mentioned seeing posters about Abdulhadi around Dublin. He is someone who has spent a lot of time in Ireland over the years and has many friends here, who are frantically worried about him as reports indicate that in the coming days he may die for his beliefs. Many of your readers seeing the news on Bahrain this weekend probably don’t know about this Irish connection, nor can they connect this story to the picture of the man on the posters, most prominently on a building in Stephen’s Green, Dublin.

The truth is that you don’t have to know much about the politics in Bahrain, the protests and violence continuing there this weekend, or the bigger issues arising from the Arab Spring to understand this story. Sometimes issues really are as black and white as this one. Abdulhadi is a gentle soul who inspired many of us who met him here, and who has suffered great personal cost because of trying to help others around him.

You at Broadsheet might perhaps be interested in this situation and his Dublin connection. If you’d like to help in any way, you can post a link to Amnesty International’s petition on behalf of Abdulhadi and other prisoners of conscience. Meanwhile: Bahrain On The Boil: Why Can’t F1 Learn From Its Mistakes? (Ed Foster, CNN)

Nothing to see here then so.