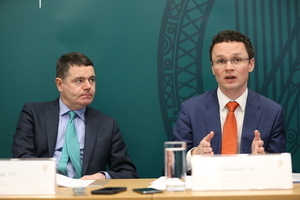 He was on the show to talk about his proposed ‘opt-in’ eGovernment service – called the Digital Postbox – which will allow citizens to receive State correspondence electronically.

But they also discussed the National Broadband Plan – after Ms Wilson asked if there was enough broadband to make this service a reality.

Patrick O’Donovan: “It’s regrettable and it seems a pity now that we have a kind of alliance building up that’s opposing the delivery of rural broadband…”

O’Donovan: “Well, I’m not going to get into what the specifics are in relation to it.”

O’Donovan: “Because, as the minister for finance said, Mary, over the weekend and you know this as much as well as I do. There’s a commercial contract negotiations currently under way, the Government have said what are maximum liability is going to be.

“But it’s interesting, you know. While the opposition have given a whole plethora of reasons of why they’re against the roll-out of rural broadband to the people like the 22,000 people in Limerick that need it. They’ve provided no alternative.

“It reminds me a bit of the Brexit-type scenario. Some of the people from the Brexiteers who say ‘alternative technologies’. I mean I heard one person suggesting, you know, that we roll it out to the village. We’ll bring broadband to the village and God is good after that for the people who are living out in the hills around it.”

O’Donovan: “I’ll give you a straight answer. I’m not a member of the Cabinet, I don’t know. And I don’t know because…”

Wilson: “Should you ask?”

O’Donovan: “No, I’ll tell you why I shouldn’t ask. Because it’s commercially sensitive between the Government which are the 15 members of the Cabinet and the consortium that has been put together to deliver a service that no, remember, no commercial company out there, after having dragged this around for years. No commercial company out there is prepared to deliver broadband to the 22,000-odd people in County Limerick…”

O’Donovan: “Well I don’t know. To be honest about it. I don’t know because I, what I can tell you, with my hand on my heart, I don’t know the answer to the question that you’re asking. What I do know…”

Wilson: “I know but Michael Creed did and he answered it. Was he wrong to answer it?”

O’Donovan: “Well I’ll tell you – we’re in the middle of commercially sensitive negotiations.”

Wilson: “But the figure is out there now. A man at the Cabinet table has given us the figure.”

O’Donovan: “But no one has, Mary, with the greatest of respect, no one has said that that’s the right figure or the wrong figure. What we know is that the maximum amount that the State’s liability will be, when you take out VAT, is €2.6billion and again, as I say, I have heard no one in the Opposition benches, or no one in the media, or nobody even in the commercial companies that are out there, who could possibly deliver this, saying ‘we could do that for a lot cheaper’.”