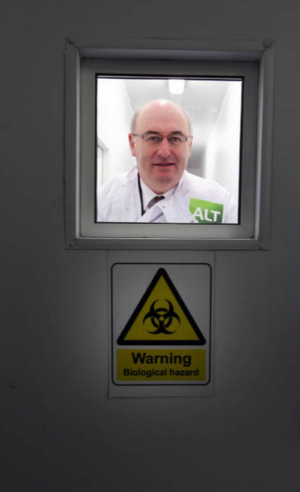 The BRegs Blog was started in November 2013 as a forum for those interested to debate
the Building Control (Amendment) Regulations (BCAR) that were introduced on March 1, 2014.

In light of the Longboat Quay situation, this morning the blog writes:

It looks like there is a growing realisation that our new system of “reinforced” self-regulation i.e. BC(A)R SI.9 introduced in March 2014 will do little to prevent another Longboat Quay.

…As Minister for the Environment, before he decamped to Brussels as EU agriculture commissioner, Phil Hogan had the opportunity to remedy the situation by specifying that construction activity is monitored by suitably qualified local authority professionals, as in the past. Instead, he introduced a regime that merely requires a newly-completed building to be certified as compliant by an architect, structural engineer or other “assigned certifier”.

Widespread criticism, notably from within the architectural profession, that this would offer no real protection for buyers was blithely dismissed by Mr Hogan, who continued to insist that his light-touch approach “will provide consumers with the protection they need and deserve.”

The then minister went even further, stating in April 2013: “As soon as these regulations become operational, homeowners who encounter a problem with a building will be in a radically better place. They will be able to immediately access information which can lead them towards a solution to the problem.” …

Mr Hogan expressed his hope that the issue of latent defects insurance for construction projects would be addressed before the new regulations came into effect on March 1st last year. But this didn’t happen, with the result that residents of new apartment buildings subsequently found to be defective have no way of seeking redress for problems emphatically not of their own making. An appalling situation that must be brought to an end, and quickly.

Related: SI9 Where Do I Start? (BRegsForum) 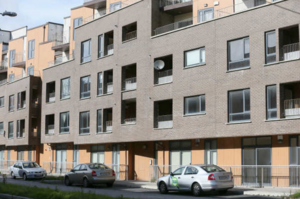 In the Irish Times editorial (Building regulations: Politics over planning, August 17) the proposed exemption of one-off houses from the requirements of the Building Regulations is referred to as a “bonus to the one-off houses . . sucking the life out of towns and villages”.

Recent experience in Ireland has demonstrated that the problems of defective housing go well beyond this. The cost to the State of repairing Priory Hall and of the pyrite remediation scheme runs to tens of millions.

One of the disappointing aspects of the recent report on the regulations was the failure to consider why professional fees for building site inspections can be so much more expensive here than in the UK, where inspection of a one-off house typically costs less than £500 (€700).

Instead, it was decided to exempt one-off houses from the regulations altogether. One-off houses are not inherently lower-risk; the report itself notes that “small houses carry big risks”, for example in relation to radon, subsidence and septic tanks.

The result will be that houses will be built without any inspections, with potentially disastrous consequences for owners, future purchasers, and the public purse. Defects are often impossible for purchasers to see when deciding to buy. This is why inspection in the course of construction is mandatory in other countries.

It beggars belief that we would now choose to exempt new houses from inspections, given the misery that poorly-built housing has brought to so many. 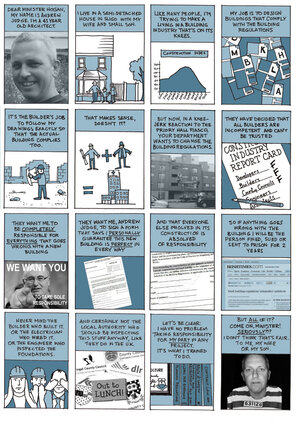 As you may be aware the Department of the Environment are proposing to alter the Building Control Regulations so that architects (or another building professional such as engineers) will be required by law to sign a Certificate on completion that says:

“Notwithstanding the responsibilities of other person/s or firms/s in relation to the works, I accept  responsibility and legal liability for the inspection of all works as necessary to ensure that they are neither defective nor contravene any requirements of the Second Schedule of the Building Regulations”. (See page 13, paragraph 4 – here)

I’m sorry, but how can one person guarantee that an entire building like a hospital or fire station is perfectly built and free from defects?

Building is much more complicated than that. There’s lots of people involved, not least the Building Contractor who is not even mentioned in the Draft Building Control Regulations.

The deadline for submissions to be made to the Department of the Environment is this Thursday 24th May 2012. It is vital that every architect and engineer make themselves heard. Email your views to buildingstandards@environ.ie

You can read more about the proposals here and here here.